DALLAS, TX -- Now in its 44th year of operation, the North American Hockey League (NAHL) is currently in the middle of a Golden Era that is showing no signs of slowing down.

When it comes to players committing to play NCAA hockey while playing junior hockey, no one in North America and the United States does it better than the NAHL. The impact the league, its member teams, and players are currently making is being reverberated from coast-to-coast.

Last year, the NAHL placed 331 players into NCAA colleges, a new record for the league. More than 70 percent of those 331 players advanced to the NCAA Division 1 level. In 2019, the league is on pace to break that record, as it stood at 170 NCAA commitments as of February 1st, a higher number than at the same time as last year’s record-breaking season.

“You look at the last five to six years — every year we hit this new number, and you start to wonder how we’re going to hit that number again,” said NAHL Commissioner and President Mark Frankenfeld. “I think it’s interesting when you peel that 331 back and you look at the 70 percent being Division I commitments. That means there are about 10 players on each team moving on to Division I annually, and I don’t think we’ve hit a ceiling yet.”

Frankenfeld has been league’s Commissioner and President since 2007. During his tenure, which includes this unprecedented number of advancements to the NCAA, along with dozens of NHL Draft picks, Frankenfeld has set the foundation for continued success, expanding the footprint of the league to 24 teams representing 14 states, allowing the league to continue to grow and truly become America's only 'national league' when it comes to junior hockey.

“The NAHL’s responsibility during this time was to evolve in its ownership, its coaches and markets in order to provide players the best junior development experience possible. The NAHL evolution during this time has allowed us to attract some of the best coaches and players in the world,” said Frankenfeld. “Back in 2007, we had 18 teams and just over 100 commitments, and today we have 24 teams and over 330 NCAA commitments. The NAHL is where it is today because of our committed ownership, who all take a financial risk by providing players top-quality coaching, skill development and community-supported teams in stable markets, and one-of-a-kind events that provide unparalleled exposure.”

“The NAHL is the league of development and opportunity, and you are seeing more and more examples as to why, be it our impressive commitment numbers or players taken in the NHL Draft. It is a great place to start and more and more players are getting noticed,” said Janesville Jets Owner and Governor Bill McCoshen, who is also the Chairman of the Board of the NAHL. “The level of our coaching is outstanding and the development of players is happening quickly because we have such a great network of coaches who are 100% focused on making the players better and then advancing them onto the higher levels. The NCAA and NHL scouts recognize that and understand that a player’s development in the NAHL is one that happens pretty fast.”

Thanks to that unparalleled exposure that NAHL players are receiving, the NAHL has taken another important step in its dedication towards the advancement of its players by announcing that the 2019 NAHL Top Prospects Tournament is headed to the East Coast for the first time in nine years. The annual event will take place at the New England Sports Village in Attleboro, Massachusetts, on February 18thand 19th.

The NAHL Top Prospects Tournament is one of the most highly scouted events of its kind.  Last season, over 230 scouts attended the event, which featured almost every NHL team and NCAA Division I school. The event continues to provide the hundreds of NHL and NCAA scouts in attendance with a look at the best uncommitted players the NAHL has to offer, as well as, some potential NHL Draft picks.  It continues to be an important part of the NAHL event model, which is inclusive of the NAHL Showcase in September and the NAHL Robertson Cup National Championship in May.

“We are excited about hosting the NAHL Top Prospects Tournament out East and showcasing our league and players to and wide variety of scouts and fans. This is an exciting new step for the NAHL and another great example of our owners investing in our product. With the large number of NCAA teams and scouts in the region, along with the increased exposure of our ever-growing NAHL East Division, it will be a nice addition to the great exposure we already get as a league and likely help us add to the record number of NCAA commitments,” said Frankenfeld. “The NAHL Top Prospects Tournament is the most unique event we host, because its sole purpose is to provide those players that are still uncommitted a great opportunity to play in front of hundreds of NCAA and NHL scouts for a chance to make a great impression and earn an NCAA commitment or get drafted into the NHL.”

Another big reason for the NAHL’s success and rise to record-breaking commitment levels each season has been the unique Ladder of Development path the league has established in the past 10 years with the emergence and sustained success of the North American 3 Hockey League (NA3HL) and North American Prospects Hockey League (NAPHL).

“Our goal in the NAHL, the NA3HL and the NAPHL is that players advance to college. Everyone’s path, timing, and development is different,” said Frankenfeld. “If you’re in the NAPHL [Midget 18U, 16U and 15U], you might play the next year in the NA3HL or the NAHL or even the United States Hockey League. Your college commitment might come through those steps, or any combination of them.”

This season marks the ninth for the NA3HL, which is one of two USA Hockey-certified Tier III junior leagues. No other Tier III junior league has had more movement and advanced more players onto play in the NAHL than the NA3HL. Through the NAHL's vast resources for development and exposure, the NA3HL provides a worthy path for players to grow, on and off the ice, while being showcased in front of the entire junior, college and professional scouting community.

The NA3HL also will host its 2019 Top Prospects Tournament in cooperation and partnership with the NAHL event on February 18thand 19thin Attleboro, MA. Thanks to events like the Top Prospects Tournament, which not only be played in front of hundreds of college scouts, but also all 24 NAHL head coaches, the NA3HL continues to make their mark in advancement of players to the NAHL this season. To start the season 40 NA3HL alumni were listed on NAHL rosters. The NA3HL is also the only league that has an exclusive NAHL tendering system available only to NA3HL players.

“Each year, NA3HL players earn more and more opportunity to advance on to the NAHL and no other Tier III league in the country sends more players on to the NAHL than the NA3HL. We recently have instituted some additional development and exposure initiatives that increase advancement numbers and provide an additional development path and enhanced experience for those players in the NA3HL,” said Frankenfeld. “The NA3HL enjoys all the same events that the NAHL does and has great owners and coaches. We all share in the common mission of creating an enhanced level of play and competition that is focused on a player’s development and advancement.”

The recipe of success for the NAHL is simple and it starts with having the right ownership in the right markets. Thanks to 24 markets and communities than span from coast-to-coast and wall-to-wall, the stability and scope of the league has never been better. Owners are hiring the right coaches and allowing them go to work in building high character and talented players.

Building on all that is the fact that the NAHL has taken great steps to enhance its social media and branding, staying on the cutting edge of technology for the 100% goal of more exposure for the players. It all makes the NAHL the premiere destination for players that want to earn an NCAA commitment.

“I believe that junior hockey is the purest form of the sport, there are no salaries or contracts hanging over the players head, just strong-willed young men battling for space, to be the hero of that particular moment, all to earn their spot on the team, the ice and their future in the sport they love. Don't be confused, these guys are big, strong, fast, skilled, in the best shape of their lives, so when they are all battling for the same space over and over, at some point, something very exciting is going to simultaneously combust,” said Frankenfeld. “There is no better place to get up close and personal with the action than at an NAHL game. It's a great way to celebrate the community, the team, and most importantly, the player. There is no better place to play junior hockey than the NAHL, most player’s start in the NAHL without a NCAA D1 commitment, but they earn it while playing in the NAHL. That’s what we are here for and what we are all about.” 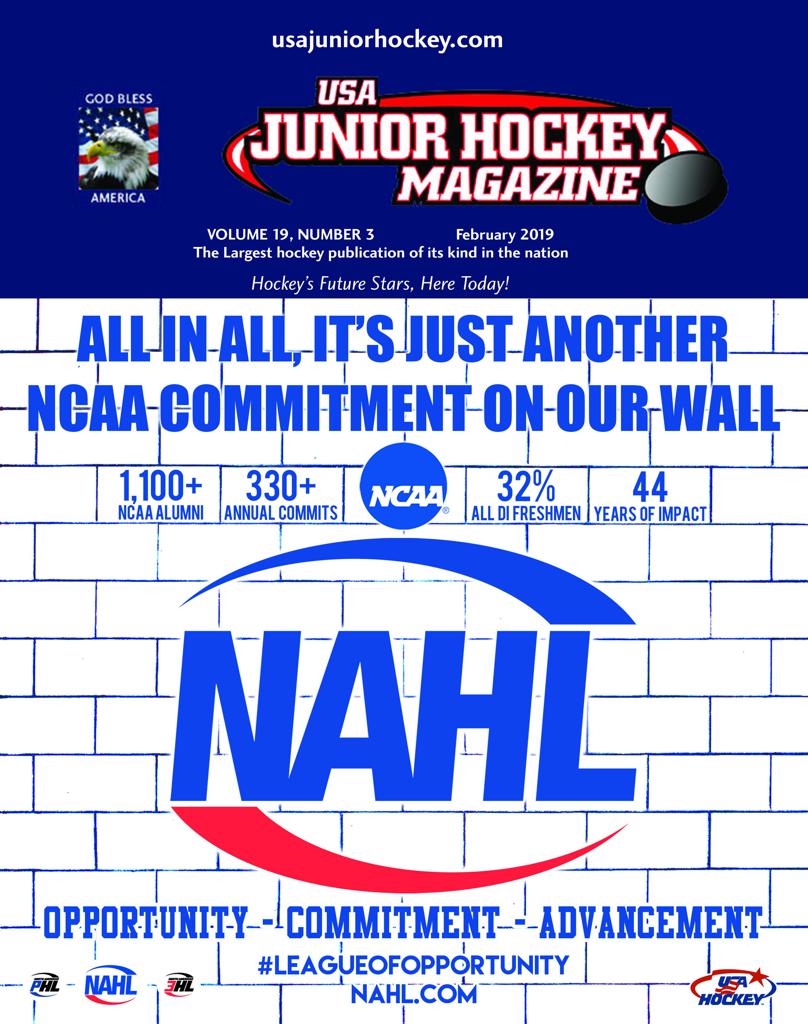 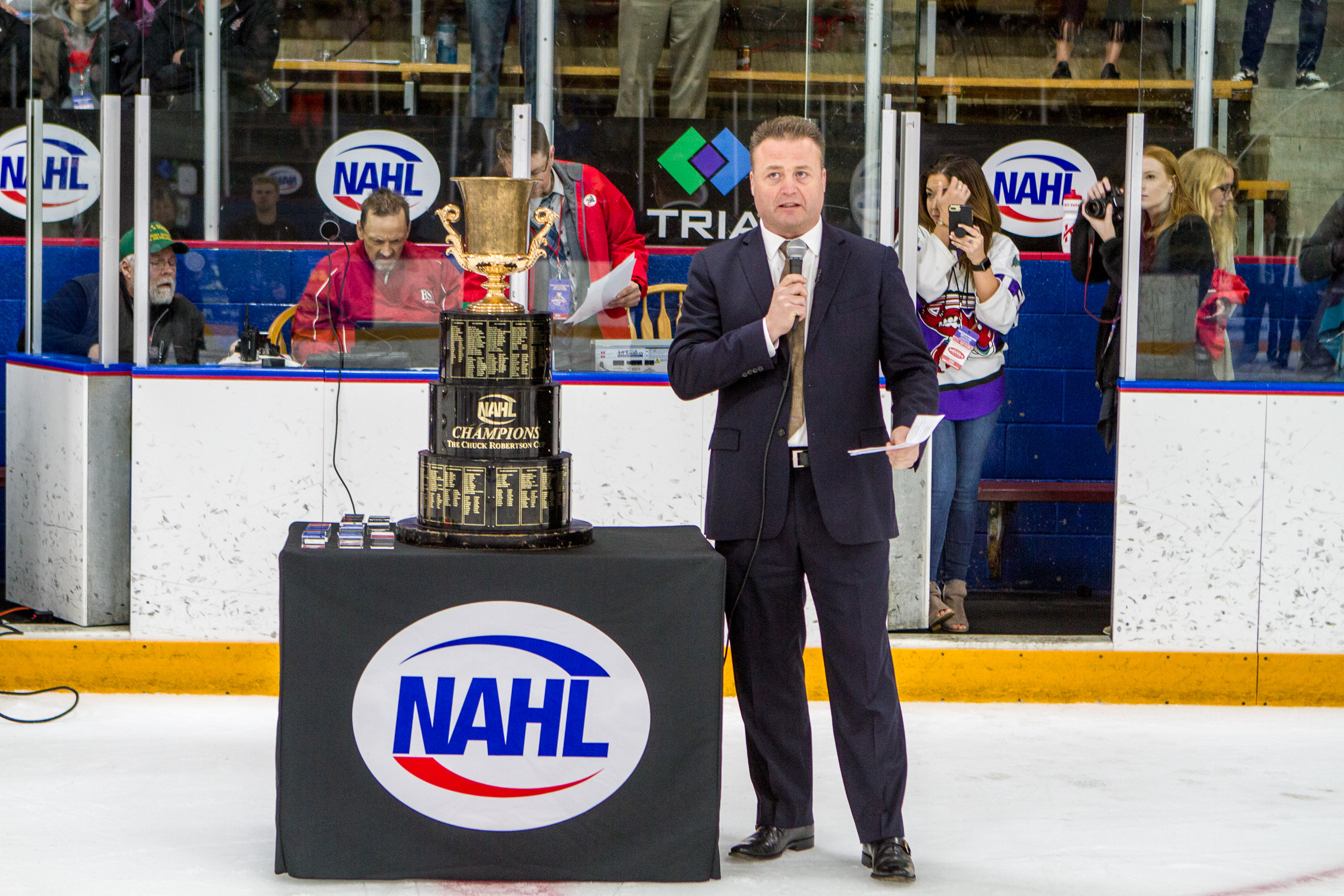 NAHL Commissioner and President Mark Frankenfeld has been at the helm since 2007, overseeing the unprecedented success and rise of the league into record-breaking NCAA commitments each season.

"The NAHL is where it is today because of our committed ownership, who all take a financial risk by providing players top-quality coaching, skill development and community-supported teams in stable markets, and one-of-a-kind events that provide unparalleled exposure.” -- Mark Frankenfeld 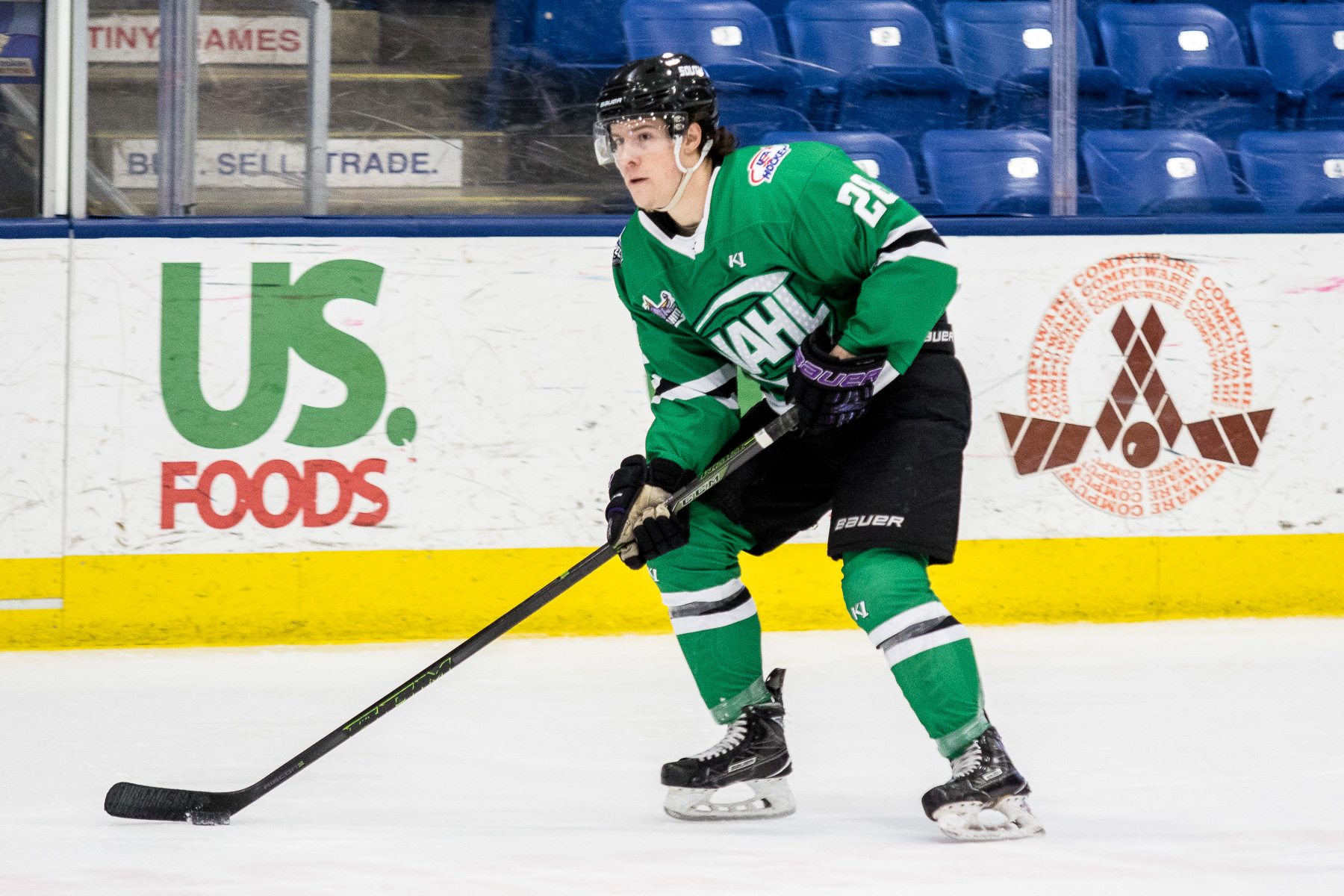 Kyle Hallbauer turned an appearance at last year’s NAHL Top Prospects Tournament into an NCAA Division I commitment to RPI just days after the event.

“Playing in front of so many scouts can be intimidating at first, but once you put it in the back of your mind and just play the way you know how, it’s just another game.” -- Kyle Hallbauer