YOUR NEXT STEP: THE EHL

BOSTON, MA – As we turn the calendar over to 2019, the Eastern Hockey League (EHL) is only getting stronger in its 6thseason. The data has once again been collected for the current freshmen class at the NCAA Division II and III levels. Following the trend of recent years, the EHL is still at the top. Don’t be fooled by leagues that may have a higher grand total, but rather look at the percentages, and factor in what the EHL is accomplishing with a tight core of organizations that are all on the same page as each other. The EHL accounts for just under 17% of this year’s Division II/III freshmen class, and also owns the highest average number of players per league team at 4.6.

“I’ve been with this group since the league was formed back in 2013,” said the EHL’s Director of Hockey Operations, Mark Kumpel. “Of course, the landscape has changed tremendously since the EHL was formed, but I like to say that as a league, we’ve just adapted. As the years have gone by, our core keeps getting stronger, focusing on what we do best.”

What the EHL does best is place its players in collegiate programs, and these are NCAA sanctioned teams. The EHL won’t deter a player from choosing an ACHA program and/or the right school for them, but our organizations take tremendous pride in each and every one of our NCAA Commitments. There is something to be said for our grand total, and what those individuals do at the next level. These players are making the teams, playing big minutes, winning awards and championships, and most importantly, they are graduating. As we near in the 900-mark for total NCAA Commitments, be sure dive deeper into what the EHL and our organizations have to offer.

The EHL vs. The EHLP

As the junior landscape has changed, so have the different words used to identify the levels of play. Under the EHL’s umbrella there are two divisions, the Eastern Hockey League (EHL) and the Eastern Hockey League Premier (EHLP). Simply put the EHL is our top division focused towards advancing players to college hockey, while the EHLP is our developmental division, that features a younger average age amongst its players. The EHLP gives many players their first experience in junior hockey, and over 60 of these individuals have climbed the ladder from the EHLP, to the EHL, to NCAA hockey. Our governors made this change prior to the start of last season, and it has served its purpose by providing a clearer picture for the players.

Diving deeper, last year’s 30 total teams between the EHL and the EHLP have combined to account for the 4.6 number that was noted above. It’s worth noting that three of players played in the EHLP last season (2017-18) and are playing NCAA hockey this season (2018-19).

What does this prove? 16 EHL teams are responsible for 135 Division II and III freshmen, and that’s an average of nearly 8.5.

Over the course of one weekend in October, the EHL made another loud statement in the hockey world. Following up on the 2017-18 season when Team EHL took on UMass Boston (UMB) in the first ever meeting between the league and an NCAA program, things grew even larger this year. Last season’s single All-Star Game was expanded to a pair of games, to go along with four campus tours and recruiting sessions with NCAA coaching staffs. Team EHL took on the Beacons once again, as well as Plymouth State University (PSU), and the group of young men represented the league with tremendous class and pride.

"I know we competed," said Chris Cerrella, the head coach and general for the New Hampshire Avalanche, who also served as the bench boss for Team EHL. "That was the most important thing for us. We wanted to make sure we went out there each day, each period, each shift and competed with a pair of very good Division III college hockey programs. It proved again that our league produces high-end Division III hockey players. That's important for the people to see, especially for the future recruits to know that we are very good league."

Alongside Cerrella were three other very well-respected head coaches in the EHL, in Rich DeCaprio (Boston Jr. Rangers), Mark Catron (Philadelphia Little Flyers), and Bill Zaniboni (Seahawks Hockey Club). These four leaders were the backbone behind the team that took a pair of nationally ranked programs to the edge.

"No one said we were going to win, or that we even had a chance to win," added Kumpel. "The fact that we held our own the way we did however, that is huge for the league. This proves more than anything else that we belong, and that was one of the most important aspects of the weekend."

Overall it was the players that benefited the most from the experience, as it produced memories that our team will never forget. On the way out the door from UMB, Wiggle Kerbrat said it best when asked to reflect on the three days.

"I got the chance to play college hockey, which has always been a lifelong dream of mine. I am looking forward to re-joining the Avalanche just like all the guys are with their teams. It's going to be awesome to make my NCAA Commitment soon, and see where the rest of the boys end up as well," said Kerbrat. 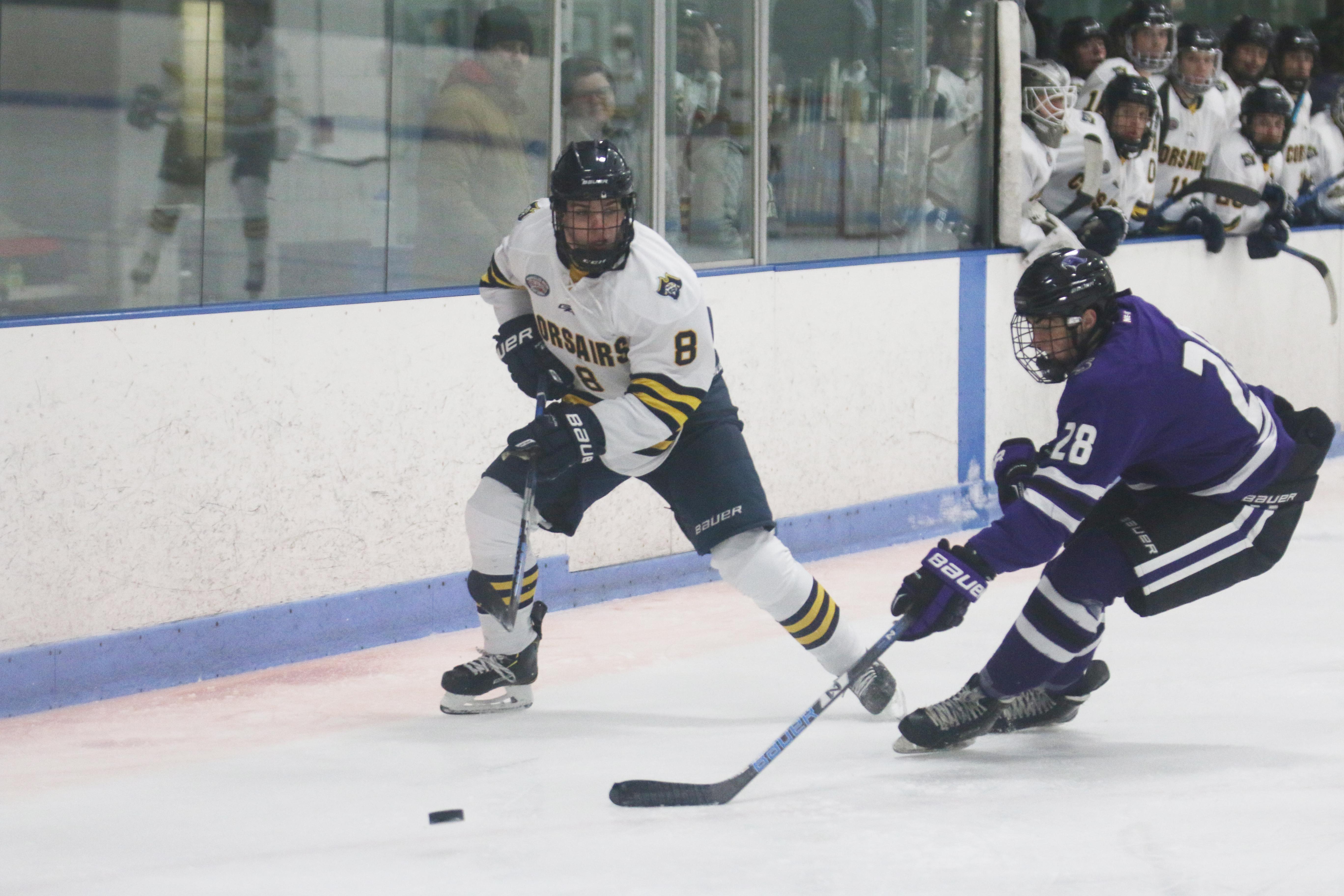 Blake Harlow is a perfect example of a player that worked his way up from the EHLP, to the EHL, and then on to NCAA hockey. The alum of the New England Wolves has carried his scoring touch with him to UMass Dartmouth. Photo courtesy of UMD Athletics. 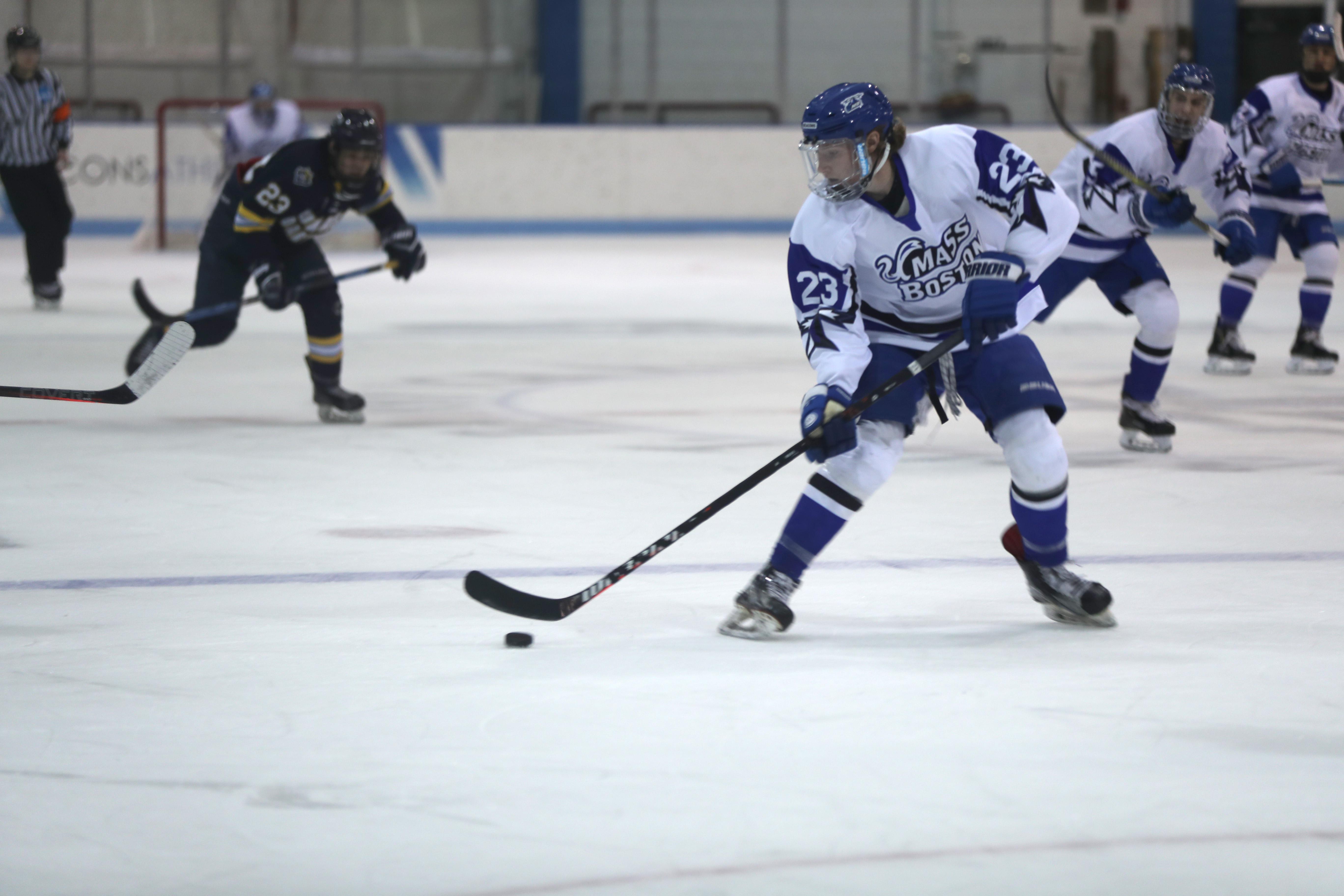 Once again, a player that represented Team EHL has committed to join UMB. Last year, Chris Peters was a league All-Star, and this year he’s playing a big role for the Beacons. Photo courtesy of Macayla Chianco/UMass Boston Athletics. 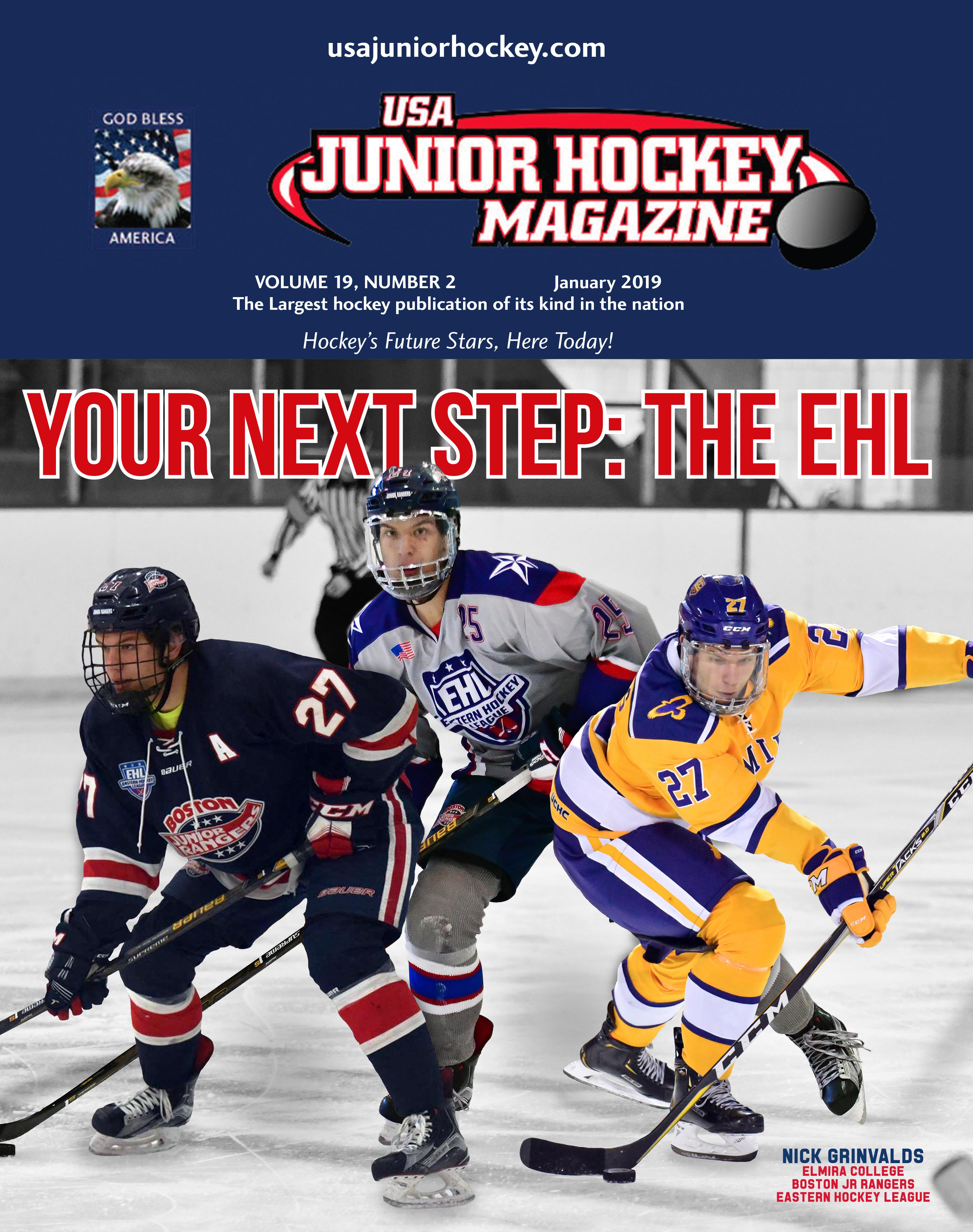 Photos Courtesy of Photos By Lex and Elmira College Athletics

At the end of each season, there is always one program with the most NCAA Commitments, along with one program that owns the least. It’s the same aspect as there always being a 1stplace team, along with a last place team. As a league however, there is only one commitment number, and that’s what we are most proud about. As the EHL approaches a new milestone, the league has done so, while helping its players advance to over 125 different NCAA programs. We’ve mentioned it before, and we’ll do it again, our teams are making sure to find the right fit for each and every individual. We factor in both the athletic and academic factors, and because of this the futures are that much brighter for our players.

Here is a short list of examples from this current season:

Zach Withington serves as the captain of the Connecticut Chiefs, and next fall he will be heading to Albertus Magnus College in New Haven, CT. The decision keeps the talented scorer close to his home in Branford, CT, and gives him a chance to play both hockey and baseball at the Division III level.

Jake Adkins was born and raised in Centennial, CO, a location in which he played midget hockey for four seasons. The ’99 took a risk by leaving home to join the New Hampshire Avalanche in August, but his decision paid off very quickly. In just 18 games, Adkins already was committed, as he will join the Beacons of UMass Boston next fall.

Last, but not least, there is always a group of players that get the chance to join an NCAA program halfway through the year. This season, Ben Parker (Boston Jr. Rangers), Alex Borowiec (New Jersey 87s), and Ryan Hoff (Connecticut Chiefs), will be joining Plymouth State, Lebanon Valley, and Worcester State for the 2ndhalf of the season.

Will their departures have an impact on how far their junior team advances in EHL Playoffs?

It’s definitely a possibility, but the EHL and its coaches are focused on the main goal.

That main goal is to provide the next step, and help each and every player advance to college hockey. The EHL provides all of our players with the resources to improve their game and reach that next step in their respective journey.

Every story is different, and we're ready to help you write the next chapter in yours.

Your next step, is the Eastern Hockey League. 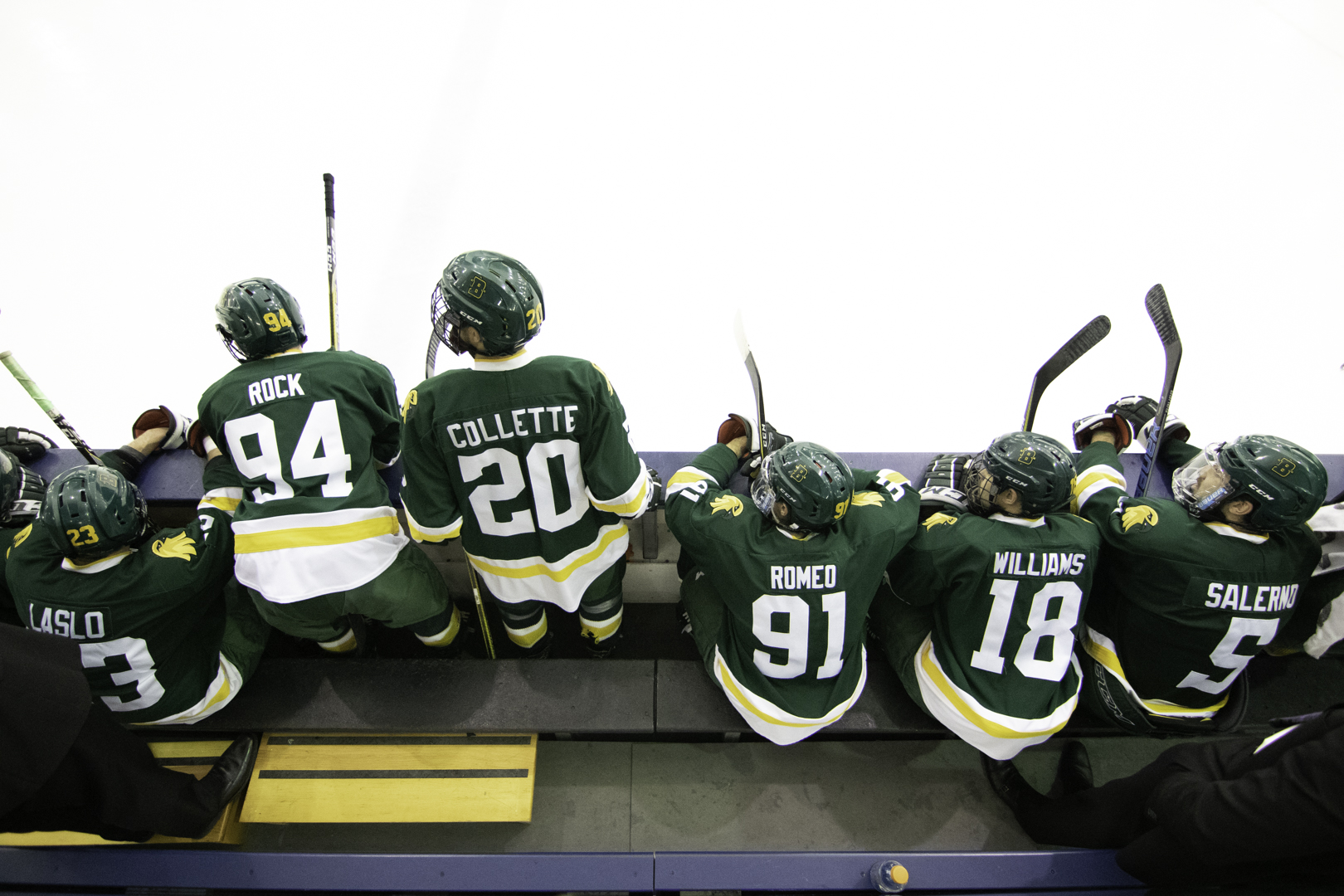 Look up and down every roster and bench in Division II/III hockey, and you’ll see multiple names with connections to the EHL. Combined between just these two pictures, there are six total EHL alumni. 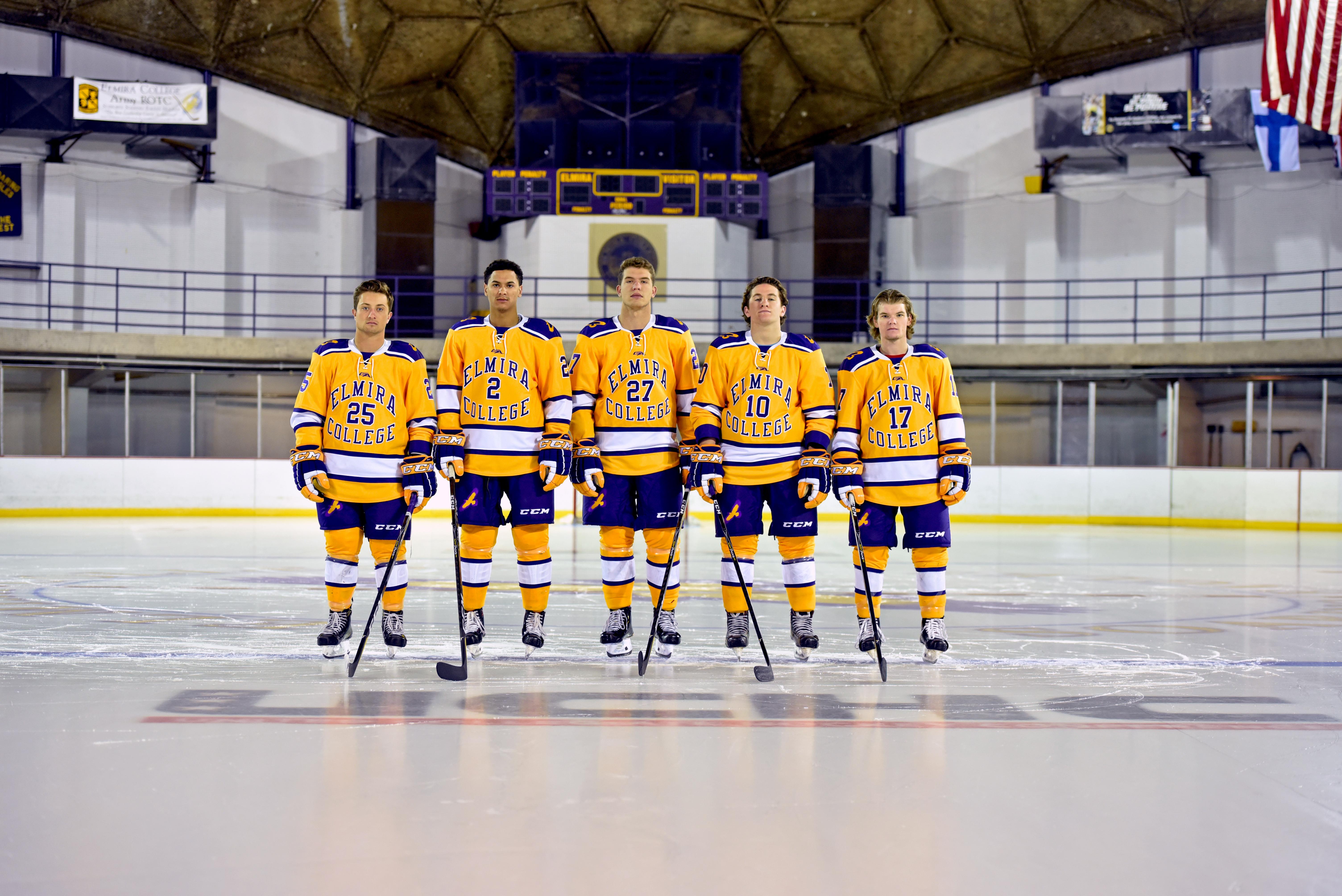