BOSTON, MA -- When the United States Premier Hockey League merged with the Eastern Hockey Federation in June, a whole new world was created. Now, for the first time in the United States, there is one single organization providing a path from Learn to Skate to tuition-free junior hockey. From Mite through Midget, and with three divisions of junior hockey, there are now over 500 teams to choose from for players who want to play at their highest level with the best competition, regardless of their age level.

Eastern Hockey Federation: The Doorway In

You’ve seen it at every rink you’ve been to - a mother or father tying the skates of their little one, whose helmet looks far too big for his or her head. Their eyes are wide, full of a mix of excitement and nervousness of what’s to come inside that big rectangle of ice.

It’s another day in the life of a Mite Development Program.

There are more than 20 organizations involved at each of the Elite and Tier 1 levels this season.

The Boston Bandits and South Shore Kings are just two organizations that have teams at all levels, from Mite Development to tuition-free junior hockey in the National Collegiate Development Conference.

“The union of the EHF and USPHL is a really good step, which will help to eliminate a disconnect between the youth and the midgets/juniors. It further explains to people what we’re trying to do, to develop the kids all the way through,” said Doug Shepherd, the Bandits’ Director of Hockey.

“I was one of the founding fathers of the EHF in 2004, and I am on the executive board for the USPHL,” added the Kings’ president Rich Touzos. “We first merged the EHF with the split-season Midgets [i.e. the former Mass. Select League] to create the EHF Selects, and now with the USPHL, it was time to merge it all together because the EHF needed the structure of the USPHL to be able to handle it all."

The Kings and Bandits are hoping to spread the message of how a Mite Development through tuition-free junior hockey organization can benefit several hundred players each year, and create a family aspect across the ages.

“I think it is certainly possible you’ll see a kid enter at Mite Development and exit 15 years later at the NCDC level,” Shepherd added. “Every level was off on its own island before, and now the USPHL and EHF group has brought it all together. Young kids are aspiring to play on that team, and they’ll attend the older kids’ games.”“For EHF programs that didn’t have the junior aspect or full-season midget hockey, it gives those programs the opportunity to see what those levels are like,” Touzos added.

The EHF Selects Division of the USPHL offers split-season midget hockey in some of the most accomplished programs in the United States.

The schedule that runs from late August until November allows EHF Selects players the opportunity to play for their prep school or high school teams as well. But when you’re talking about programs like the Cape Cod Whalers, Boston Junior Eagles and Mid-Fairfield Jr. Rangers, this is definitely no “warm-up” league.

“The USPHL merger was a vehicle to get some of the best programs under one umbrella,” said Pat Bohan, executive director of the Greater Boston Junior Bruins. “You get the best of both worlds - full-season teams [in the USPHL Midget Divisions], and also split-season midget teams [EHF Selects] that are more prep school-oriented."

The Greater Boston Jr. Bruins won the 18U Nationals back in 2006 and the 17U title in 2004. The Whalers were 18U National runners-up this past winter, and the Mid-Fairfield Jr. Rangers won it all at the 18U level in 2017, and the 16U Nationals in 2005. The Eastern Mass. Senators were 17U champions in 2000. “Our goal is to showcase our boys and put them in front of as many eyes [of scouts] as we can, so that they can be rewarded at the collegiate level for all of their hard work.”

The NCDC was introduced in 2017 as the United States’ only tuition-free league entirely located in the Northeastern U.S., giving it the smallest travel footprint of any league of its type.

The league saw more than 120 players from its first season commit to NCAA colleges, with nearly half of those advancing to Division 1 - and this was from a league with 11 teams.

Not only does the NCDC have a footprint keeping travel to 7 hours on the road or less one way, but the league’s footprint nearly matches those of the Hockey East Association, ECAC Hockey, and Atlantic Hockey Association. Its proximity to the scouts allows for maximized Division 1 player exposure, and the footprint also matches those of several NCAA Division 3 conferences.

Take it from someone whose teams have won the last two Dineen Cup (NCDC Playoff) championships.  “The tuition-free model is in its infancy in this Northeastern U.S. area, although junior hockey overall is not,” said Islanders Hockey Club head coach/GM Sean Tremblay. “Players do not have to travel thousands of miles away to play tuition-free hockey. They can now do it in their backyard. The league is set up perfectly, geographically, both so players don’t have to leave home and in terms of the geography of college hockey. It’s just going to get better and stronger every year.”

The Premier Division has multiple missions, including developing players for direct-to-NCAA college hockey advancement and being a proving ground before stepping up to higher levels of junior hockey, especially the NCDC.

In college terms, there were more than 160 direct-to-NCAA commitments, along with nearly 100 additional commitments to ACHA or NAIA schools from the Premier Division in 2017-18.

“It’s been good for us, especially with the showcases and the amounts of colleges at those showcases,” said Brad Jones, GM of the Hampton Roads Whalers. The Whalers won the Premier and Elite championships in 2017-18. “All the events we do as a league help to advance the commitments. We had 16 players committed out of our Premier and Elite championship teams last year.”

Six teams joined from another Tier-3 league to take advantage of the USPHL’s unmatched scouting, development and infrastructure, especially the aforementioned Affiliate Program.

“[One] big selling point was the Affiliate Program with the NCDC, which will be good for us,” said Ken Miller, head coach/GM with the Toledo Cherokee. “Our division was one of the strongest in our former league, and I believe we’ll do very well when we head to the showcases.”

College scouts want the best players they can find, and they are not shy about traveling to Toledo or Florida to find that USPHL gem. “I tell players asking about the USPHL and asking about playing in Florida ‘Just look at the college commitments,’” said Florida Eels GM Frank Scarpaci. “They come back to me saying ‘Wow, Coach, I know what you’re talking about.’”

The area of the USPHL that has led from midsummer to September in NCAA Division 1 college commitments is in the USPHL Midget Divisions. The USPHL fields multi-tiered divisions at the 18U and 16U levels, and one tier of teams at the 15U level.

From July to mid-September of this year, the Midget Divisions saw seven players make their commitments for future seasons at that highest of college hockey levels. The USPHL Midget Divisions have quickly become one of the most fertile of grounds for D-1 futures.

“Obviously, the growth of the league is great. But for us, the best part of the league is still the footprint, with the opportunity to play so many games in New England with Hockey East, Atlantic Hockey and ECAC Hockey schools right there,” said Skipjacks Hockey Club owner/head coach Jason Kersner. “Along with those Division 1 conferences, almost half of Division 3 hockey is within the footprint or all within short drives. “The Skipjacks have had the opportunity to be in other leagues, but the USPHL provides the best opportunity to play good competition in front of top schools on an every weekend basis,” Kersner added. 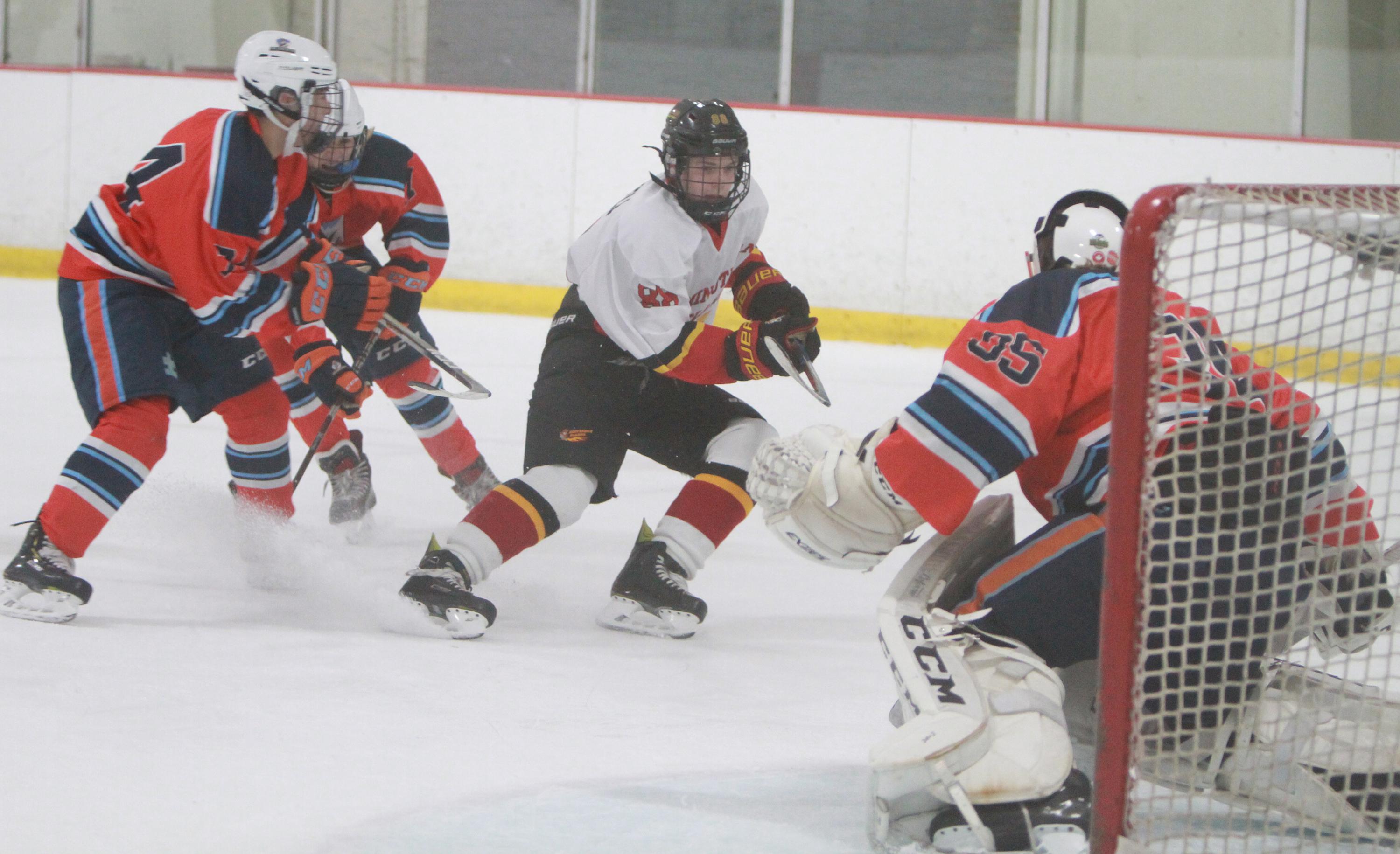 The Minuteman Flames and Islanders Hockey Club do battle during a mid-September tilt in the Eastern Hockey Federation. With the addition of the EHF, that brings more than 500 teams together under the banner of the USPHL. Photo by Joshua Boyd / USPHL 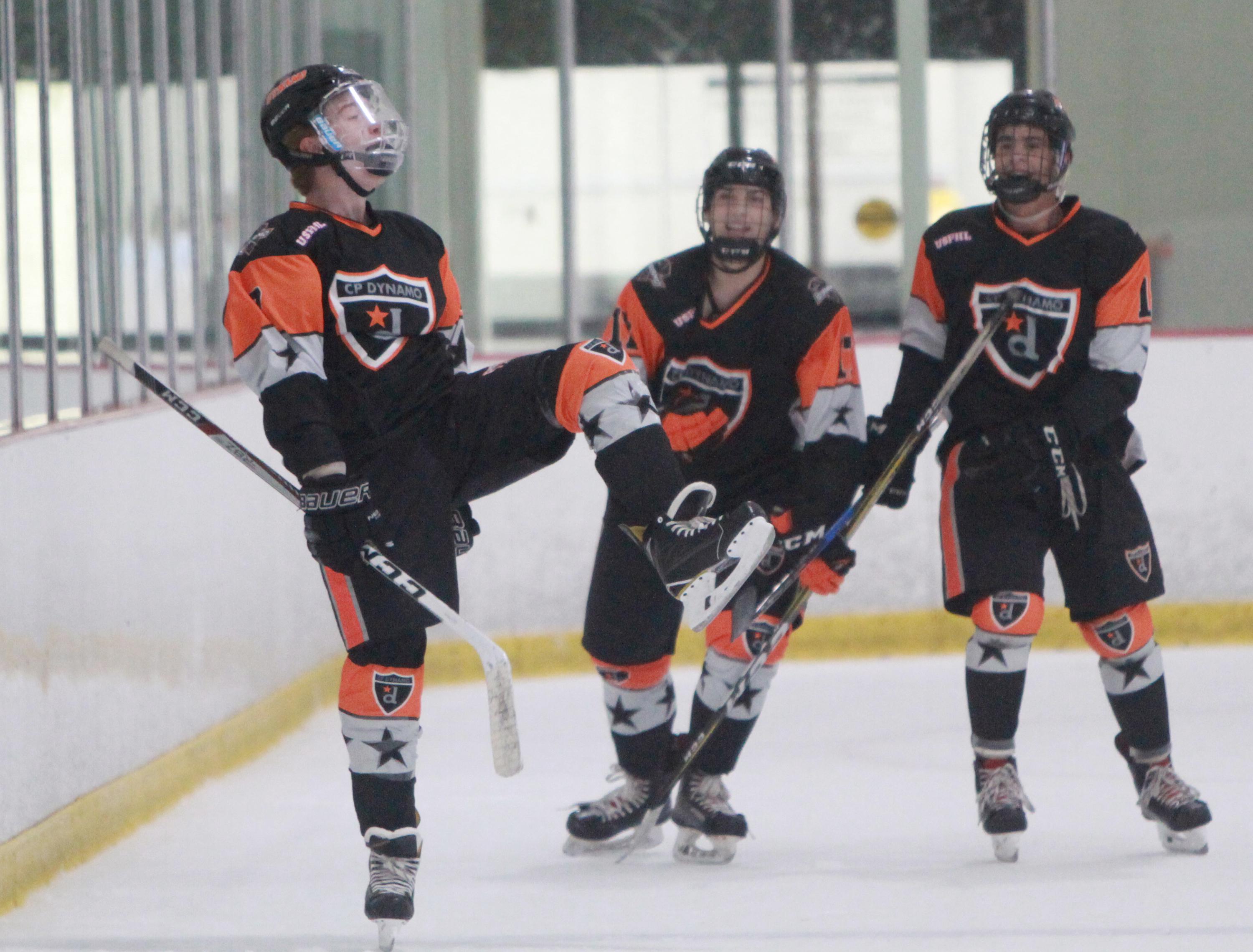 The CP Dynamo celebrate a goal at the Boston Junior Bruins Shootout. The Dynamo are just one-team in the multi-level 18U, 16U and 15U full-season Midget divisions. Photo by Joshua Boyd / USPHL 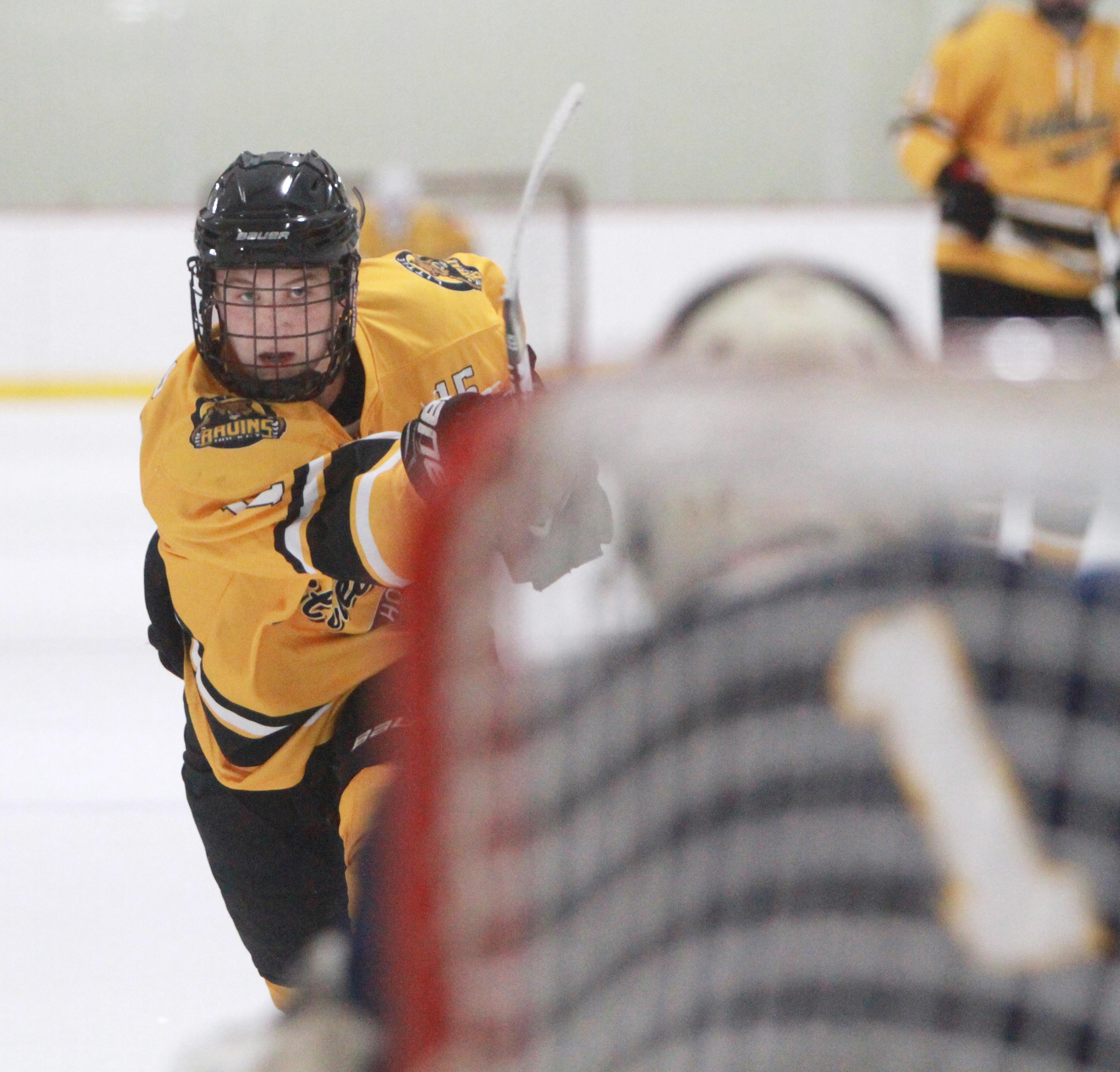 Jack Hughes fires a shot at the Boston Junior Bruins Shootout for the Little Bruins' 18U in the EHF Selects Split-Season Midget league. Photo by Joshua Boyd / USPHL 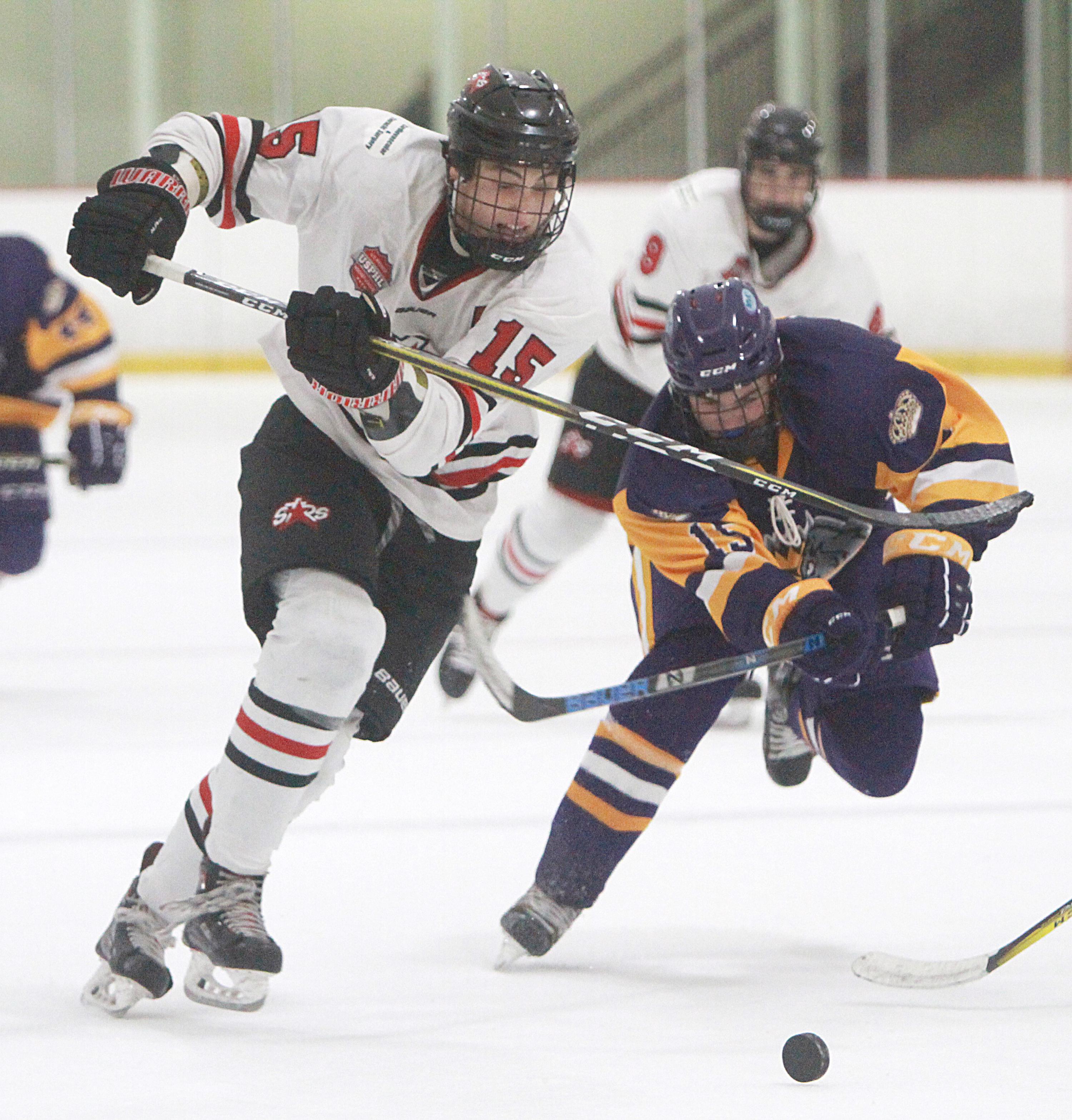 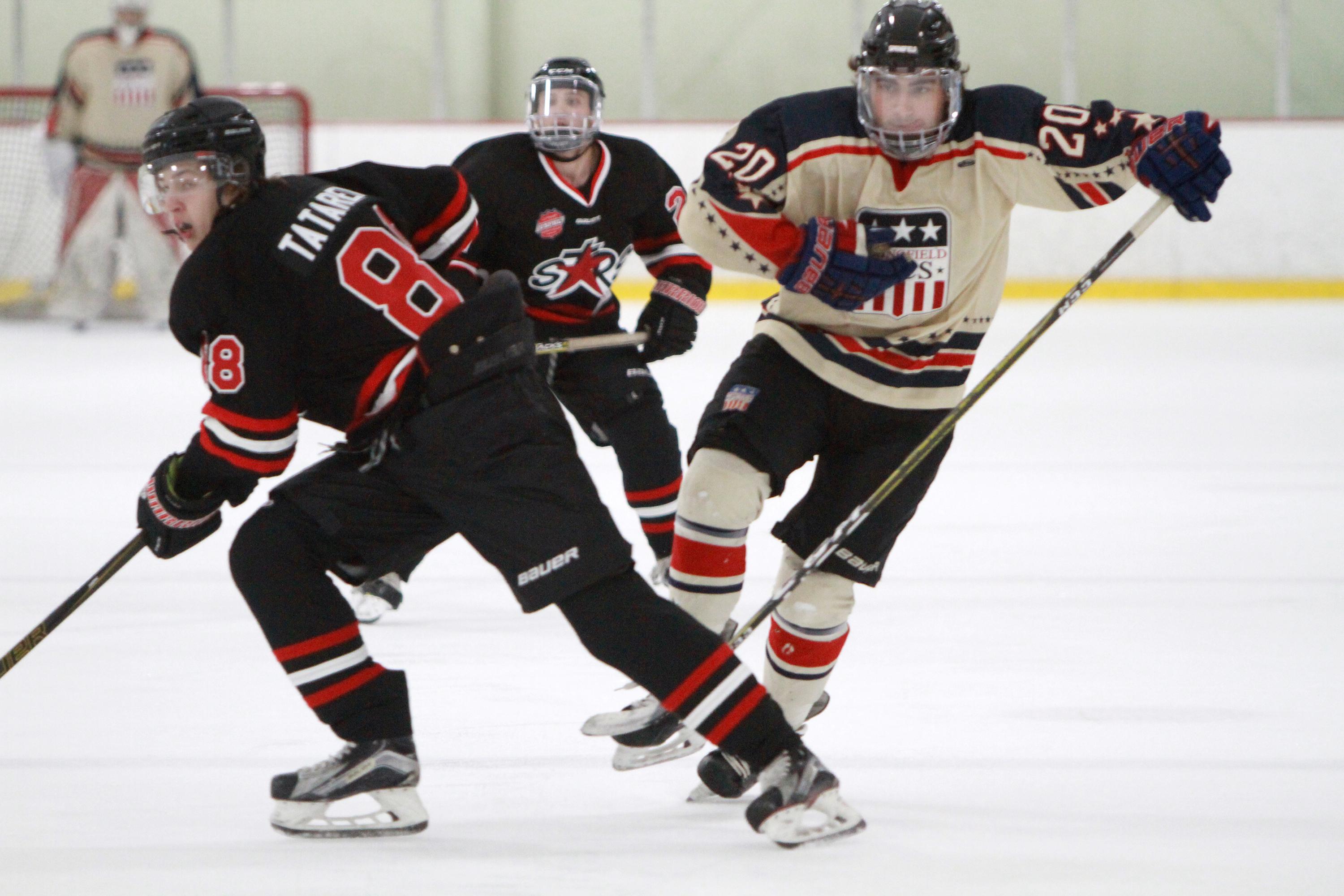 The Syracuse Stars and Springfield Pics meet in a USPHL Premier match-up. The Premier and Elite Divisions operate as a strong feeder for the NCAA and other college programs, as well as a step for players to jump to the NCDC. Photo by Joshua Boyd / USPHL 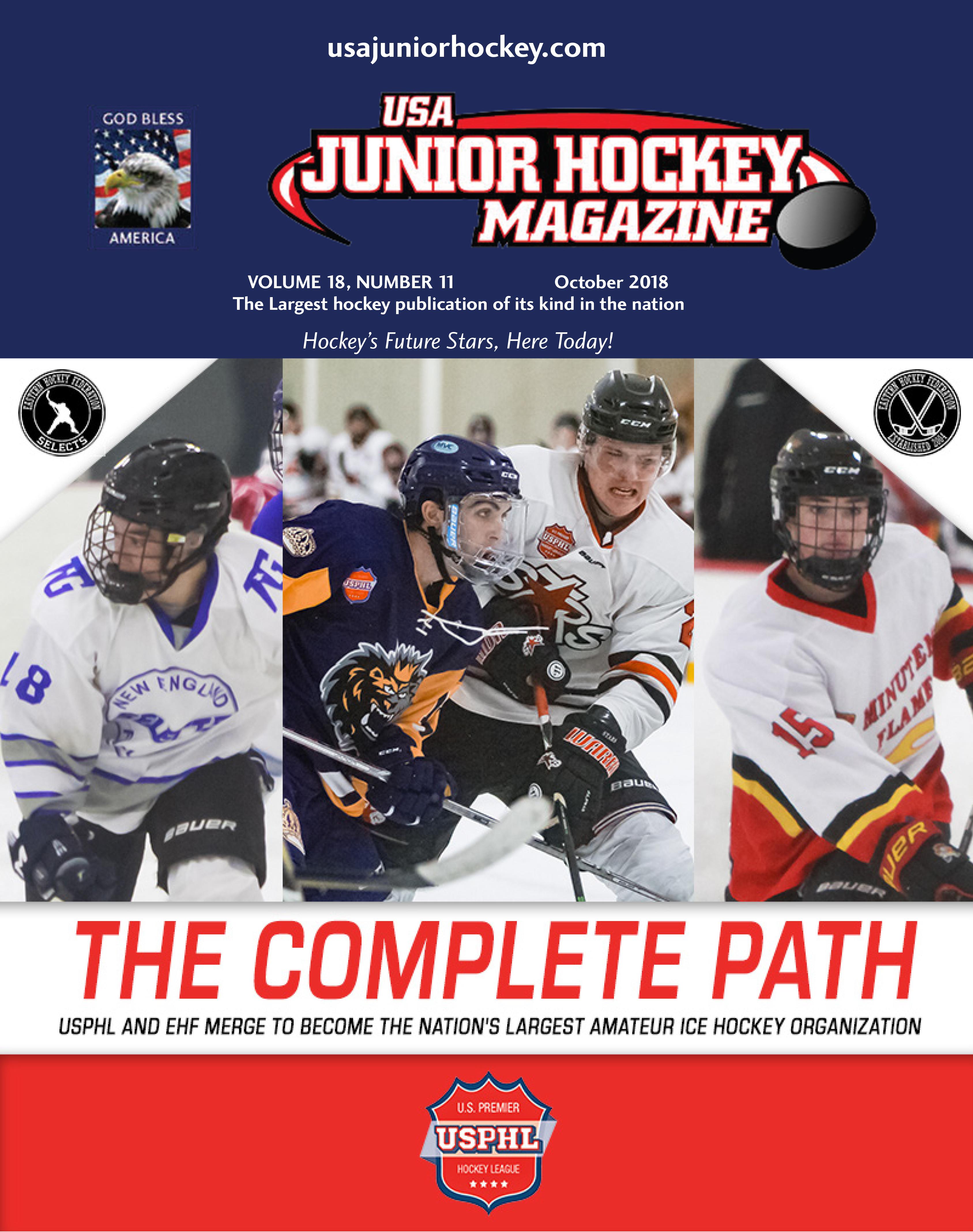 Looking to the future

The spark has ignited within the EHF and USPHL communities, and those organizations that do not have the full “Cradle to College” Mite Development to Junior path are now considering building a similar model of their own.

“The EHF and USPHL merger is providing the blueprint for what we look to do here in Virginia,” said the Hampton Roads Whalers’ Brad Jones. “We create our programming around the elements we have here, such as summer training with juniors. Also, the first three weeks of training camp, we have our Bantams and Midgets skating with us, to get them up to speed of how they need to play at this level.

“We’re trying to work that development curve in-house ourselves, so our players can go from our program to Tier 1 or Tier 2 (NCDC) juniors and on to college hockey,” Jones added.

John Schwarz, who is the Midwest Regional Commissioner for the USPHL Premier Division, said that teams from Minnesota to Michigan are also taking notice of how the New England teams with EHF, EHF Selects and USPHL teams run their comprehensive programs.

“In the Midwest, our organizations have just the junior teams, but what the EHF and USPHL merger does is allow us to look at this concept,” Schwarz said. “Maybe we can start looking at our youth organizations and combining them with our junior teams."

With so many organizations now featuring the complete hockey road map, or considering creating their own, Sean Tremblay (Islanders Hockey Club) expects the interest to grow exponentially over the coming seasons.

“Having the EHF-to-NCDC/Mite Development to Junior path is obviously at the forefront of modern amateur hockey,” Tremblay added. “To have that development by professional coaches from 6 or 7 years old to 19 or 20 is very unique, not only to our Northeastern U.S. area, but unique to the whole country.”