WARMINSTER, PA -- Chris Kanaly has been with the Philadelphia Revolution for 10 years, but this year’s training camp is “arguably the best” he’s seen. That should bode well for a team that enters the 2018-19 season with tremendously high expectations.

He ran the players through two weeks of two-a-days, going Monday thru Thursday with practices both weeks. The players came ready to go and met each challenge Kanaly threw at them head-on, leaving the head coach and general manager highly optimistic heading into the 2018-19 season.

“These guys came back ready to go. We hit the ground running from the first day of training camp,” said Kanaly. “Our returners came back hungry to win and get better every day to generate more college offers. And our newcomers, both from within our organization and outside imports, came to camp in tremendous shape with great attitudes.”

The Revolution are hoping that such a promising training camp allows the team to have a storybook season. Philadelphia is routinely one of the younger teams in the EHL and that was no different last season, with only a handful of ‘97s on the team. The youth did not seem to be too much of an issue since the Revolution only won 41 games and advanced to the Frozen Finals Championship Game. They did lose to an older, more experienced New Hampshire Avalanche team in that championship game, but that loss seems to have done wonders for the make-up of this year’s Revolution team.

“We brought back a good group of guys, guys who will be major players for us at both ends of the ice,” said Kanaly. “Obviously, having the season we had last year made it easier to convince guys to stay another year and add additional talent to our team through quality signings.”

Of the returning players, Kanaly pinpointed top-line forward Noah Bradley and the “St. Louis Trio” as his major offensive producers.

“Bradley had around 40 points for us a year ago playing on a talented line,” said Kanaly. “He has the size and skill to again be a go-to guy for us on the top line. The three guys from St. Louis, Samir Abouelhana, Jake Russo, and Justin Meers could easily combine for 200 points this season, they’re that good.”

Bradley did in fact have around 40 points last season, his first with the Revolution’s EHL team, 38 to be exact. He had 16 goals and 22 assists, scoring in all situations with two power-play and three shorthanded goals.

While some eyebrows may raise after hearing the number of points Kanaly say Abouelhana, Russo, and Meers will combine for, it’s not too far of a stretch to think that the St. Louis Trio could surpass 200 points this season. Gone from the team are the first, second, and fourth leading scorers. Austin Morgan and his 73 points are headed to the University of New England this Fall, while Bryce Witman took his 37 goals and 62 points to the NAHL’s New Jersey Junior Titans. The fourth leading scorer was assistant captain Martin Kapoian who recently announced his commitment to Elmira College for the 2018-19 season.

With the expectation that the Revolution’s offense will at a minimum stay as the same level of production this year, that leaves quite a bit of scoring left to pick up. Abouelhana, Meers, and Russo combined for 150 points last season. A slight uptick in production as the veterans on the squad and that 200-point mark is well within their reach.

The Revolution also have a pair of promising D-men, Alex Pelletier and Tommy Donnelly, back in the fold and a starting goalie in Logan Kramsky who was last year’s backup, seeing time in 10 games, including eight starts. Kramsky is getting looks from a number of NESCAC schools and is looking to close out his junior career strong.

Those are just a handful of players in what will amount to one of the deepest teams Kanaly has coached during his time with the Revolution.

“We picked up some other high-end talent, both imports and from within the organization, to fill out our roster and add to what we’re doing,” said Kanaly. “We can now truly go nine deep up front. It is going to be a challenge for other teams in the EHL to match up with our talent and depth.”

Kanaly was very pleased with the 2017-18 season, minus not winning the Frozen Finals Championship. Aside from winning 41 games and winning the Division, he had multiple players commit to high-level NCAA Division III programs.

If he has his way, this year will be a near mirror image, just with the ending including the trophy.

“We expect to win the division and we expect to win the league,” stated Kanaly. “For these guys, especially the ones who came back another year, this season is about winning a championship and helping them earn commitments to high-end programs." 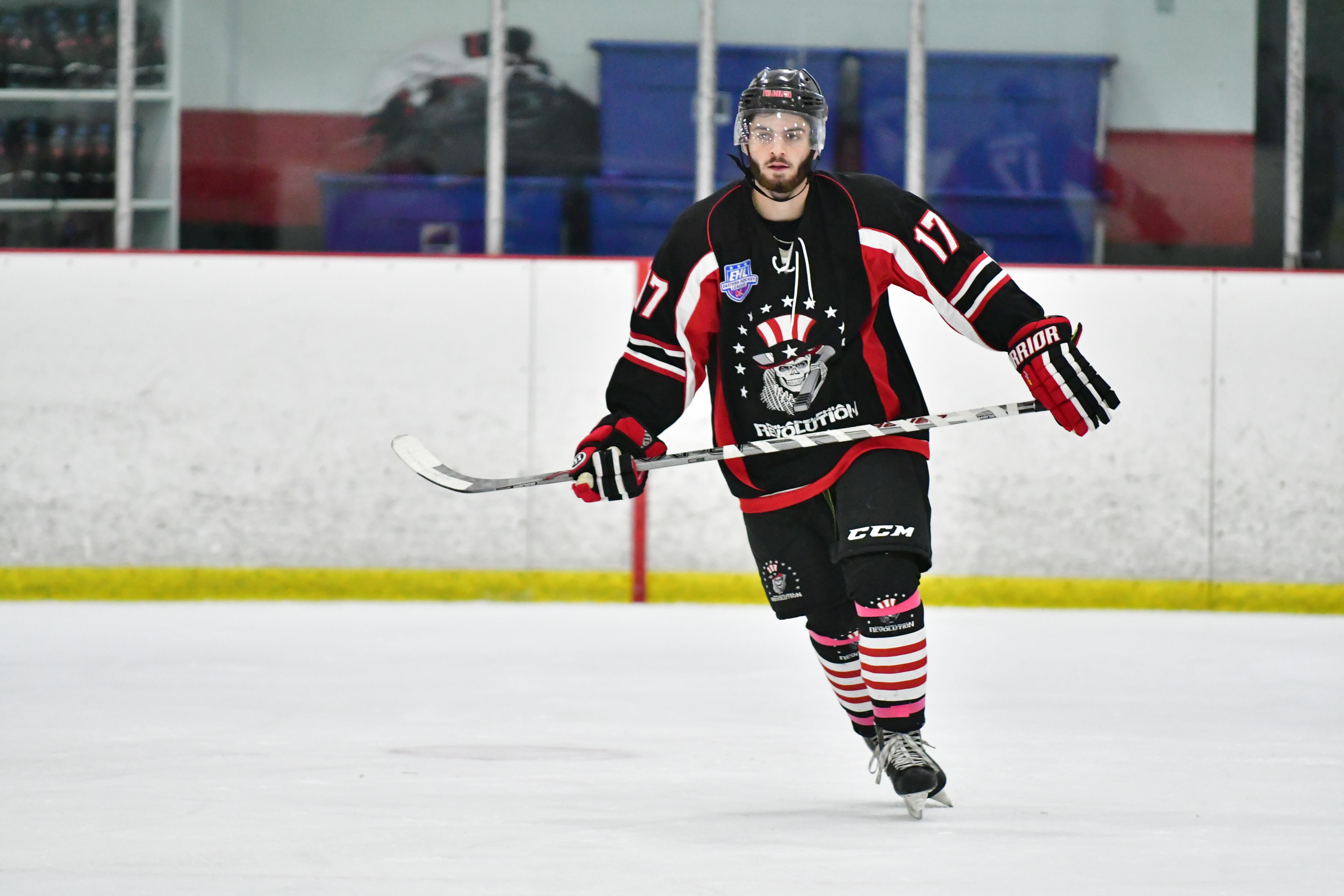 Jake Russo ('98) is back for his second season with the Revolution, after tallying 43 total points in his first year in the EHL.