Seasons In The Sun

FORT MYERS, FL -- By the time the Boston Red Sox arrive in Fort Myers, Fla., each February to begin work for their upcoming baseball season, the cross-town Florida Eels have been cranking on all gears for seven months.

In midwinter, Eels players have completed almost 600 hours of on-ice work at their home facility the Skatium, along with nearly 400 hours of off-ice training and shot more than 1,600 pucks in practice alone.

That doesn’t even count the 44 games played in the United States Premier Hockey League’s Premier Division, the nation’s largest junior league and the leader in combined NCAA Division 2/3 and ACHA recruitment.

And all of that is even before the first puck is dropped for the USPHL playoffs, which can pit teams from as far afield as Florida, Wisconsin and Maine against each other for one single national championship.

The Eels always have their eyes on that prize, but general manager Frank Scarpaci and Eels head coach Frankie Scarpaci see wins and championships as secondary to the ultimate goal – player development and advancement.

“Let’s face it, a player comes to junior hockey to develop his skill set in order to elevate him as a solid prospect to play at the college level,” said the GM Frank Scarpaci. “We are now up to 229 players we advanced to college [since our founding].”

One of the more recent of that 229 total is Brian Kozek, a Chicagoland native who kept coming back to the Eels and just completed his fourth year under the Scarpacis. He is headed for NCAA Division 3 Framingham State University in the fall.

“When I came to Florida, I was young and inexperienced, and I hadn’t trained like we have down here,” said Kozek. “You’re in the gym three to four times a week, you have open availability to the inline rink across from the ice rink, and you can skate on the ice five days a week.

“I actually stayed down in Florida the last two summers to train with Coach Frankie, and this past season I had my personal best season in my career,” said Kozek. “That speaks volumes about what Frankie does for his players, taking time out of his own summer to work with you. That work I did helped me stand out to the college coaches, and the work I’m doing now with Frankie will help me get ready for college this year.”

Overall, in addition to several NCAA Division 1 commitments of former Eels players, the Eels have also seen nearly 130 NCAA Division 2 and 3 commitments, with the remainder of the 229 total being commitments to ACHA club and National Association of Intercollegiate Athletics programs.

While college coaches do enjoy getting down to Florida, especially for December’s USPHL Premier South Showcase, the Eels are always happy to bring their show on the road to the hockey hotbeds. They are certainly proactive in this sense.

“The Eels attend four college showcases to enhance their players’ visibility and exposure,” said GM Frank Scarpaci. “My four decades of experience have proven that if you are not seen, you won’t be scouted, and if you are not scouted, you are not recruited. Therefore, we do whatever it takes to garner our players that visibility and exposure. Generally, scouts have to see a player three times before recruiting him. With the Eels, we want to be ahead of that curve.”

Gathering of the Tribe 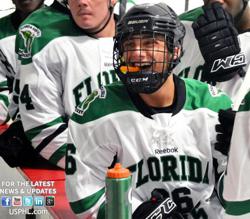 Colton Crabtree, a ‘98 from Colorado, will continue to pursue a college commitment with the Eels in 2018-19. Courtesy Photos / Florida Eels

The Florida Eels have turned out some fine talent from the Sunshine State over the years, but they certainly don’t limit themselves to their backyard.

In order to make it to the college game, players need to be challenged and go against the best competition available. With this in mind, the Scarpacis know they cannot leave any stone unturned in their search for players for both of their top-tier USPHL Premier squad and the developmental USPHL Elite squad.

The 2018-19 teams, in fact, will be a heavily international mix, as the Eels utilize their overseas scouting team to build the two best teams they can find.

“We have key imports coming from Sweden, including our top defenseman, top two forwards and one of the best goalies in all of Europe,” said GM Frank Scarpaci.

Europe will also provide Eels players from Russia, Kazakhstan, Switzerland, Ukraine, Hungary and France, while two players are joining from Australia and five from Canada.

The Eels have multiple scouts who live and work in Moscow, Russia, as well as Sweden and the Czech Republic.

“This year, and last, we have players coming from all across the USA,” he added.

It was Colorado where the Eels found one of the 2017-18 Premier team’s top scorers, Colton Crabtree. He completed his second year with the organization and is looking forward to returning for a third as a ’98 seeking a college commitment.

“One of their scouts in the Denver area messaged me over social media. They had watched me over the years. I was set to go to a team in Montana, but I researched Frank and Frankie Scarpaci, and I just kept going back to what they’ve done with getting kids into college,” said Crabtree, who scored 66 points in 41 games for the Premier team last year, after playing the prior season for the Elite squad.

“It’s a good place to play with a proven track record of putting kids into college. The proof is all on paper, and that’s what it’s all about,” Crabtree added. “You’re in the gym three, four or five days a week, they have skills days, and because it’s not all about athletics, school courses, too. You get the ice whenever you want. You’re treated like an NCAA Division 1 player.”

The Eels’ scouting route began in St. Louis, Mo., with the USA Hockey High School Nationals All-Star event, which was followed by trips to Michigan and New England for Pre-Draft Showcases.

Next up, in May was the USPHL Spring Showcase, where coaches and scouts from the USPHL’s tuition-free Division 1 prospect-rich National Collegiate Development Conference are scouting talent.

The Eels have been to Global showcases in Vancouver, B.C., Chicago and most recently, Las Vegas. They’ve scouted the CCM Junior Showcase in Denver, and the California Prospects Showcase, as well.

Upcoming in July, the Eels will be at the USPHL Summer Showcase, the Pro-Am Senior and Junior Chowder Cups, the Islanders Hockey Club NCDC camp, as well as the New Hampshire Junior Prospects Showcase, another July showcase in Montreal and the Junior Pre-Camp Showcase back “home” in Tampa, Fla.

Working for their Players' Future 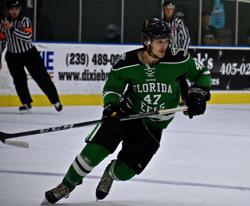 At the core of the Eels is their regimented development plan. We gave a glimpse of the totals above, but each day, this includes three or more hours of on-and off-ice work five days a week for 40 weeks of the year.

GM Frank Scarpaci has seen other programs that offer three on-and-off-ice days per week, “so we offer 40 percent more training.” There are also game-day analytics, which he hasn’t seen other programs offer, along with three full-time, professional coaches on the hockey operations staff, and one part-time. Three full-timers are also more than the norm he has seen in his 40 years in hockey.

Frank Scarpaci said that all of this work to get players to college makes the Eels a top-flight junior program for college advancement, but that’s only half the story. The Eels also work closely on the financial side of college with each player, delving deep into every possible source of scholarships and/or grants.

CNN Money posted a story online in May of 2017 that public colleges’ in-state tuition for four years can run to $56,840 – for tuition alone. The average for private, non-profit colleges runs to more than $104,000 in tuition.

“That is incredible. An entire generation of Americans will be graduating owing this incredible debt before even starting to work,” said Frank Scarpaci. “How this will ever be affordable is beyond me, when you add car payments, rent, food, etc.”

“What separates the Eels from the rest is we garner huge grants and scholarships for our junior players who advance to college,” Scarpaci added. “More specifically, the scholarships and grants received by Eels players have been systematically averaging $25,000-$30,000 per year. Indeed, this past week, one of our players hit a high of $37,000. This is simply phenomenal.”

“We review daily Fast Web [www.fastweb.com] scholarship and grant offerings, and we actively and aggressively assist all of our players in garnering monies to help defray expensive tuitions,” Scarpaci said.

Taking Care of Every Athlete 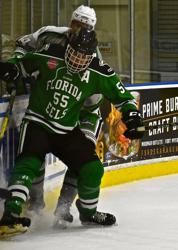 Working towards their players’ academic, athletic and financial futures are just examples of how the Eels take care of every student-athlete that signs to play at The Skatium.

Kozek said that the Eels helped shepherd him through a tough injury. Not only did they not release or trade Kozek, but both his GM and head coach checked in with Kozek even when he was back home in Chicago.

“I broke my wrist in the playoffs that year, but instead of having to go back home, the team doctor saw me and took care of me,” said Kozek. “While I was out on the lineup, I was able to be on the bench, help out at practices, and Frank and Frankie both always asked me how my appointments were going.

“I went to Chicago for the summer, but every month or twice a month, either Frank or Frankie would check in with me to see how I was doing, and that they had a spot for me for the upcoming year,” he added. “That’s when it hit me, that I really belonged to this organization. It’s a very simple system with Frank Scarpaci – if you are loyal to him and do the work he wants, he will be loyal to you and help you with whatever you need.”

Kozek still had to miss time that next season, but Coach Frankie Scarpaci would work with him privately to get him back to playing shape.

“The support throughout that injury let me know that I was wanted, and gave me that sense of family,” Kozek said. “They were constantly giving me lists of colleges to look at and reach out to, and working with me on highlight videos. They were a big help with the whole college search process.”

The Eels had 17 college commitments through late June.

Brandon Rosario, an assistant captain and second-year veteran, was among the USPHL Premier’s leading scorers. He will move on to Neumann University, an NCAA Division 3 school in Aston, Pa.

“He had many options and wanted to take his time before committing,” said GM Frank Scarpaci. “He realizes this is a life decision.”

Kellen Crowther (Marian University) and Bryce Freel (Northland College) are also bound for the NCAA game. Caden Tchop committed to Waldorf University, in the emerging National Association of Intercollegiate Athletics, and Rajahn Munning is going to Thomas College, of Maine, which has an ACHA program.

“That brings this year’s total to an incredible 17 players expected to advance to college hockey programs, very impressive,” said the GM Frank Scarpaci. “That would be five straight years were the Eels have advanced players in the double digits.”

From the team’s compassion for their student-athletes to their endless pursuit of the right mix of the same, the Florida Eels have become a top destination for hockey development for Floridians, beyond to the rest of these United States, and to those around the world. 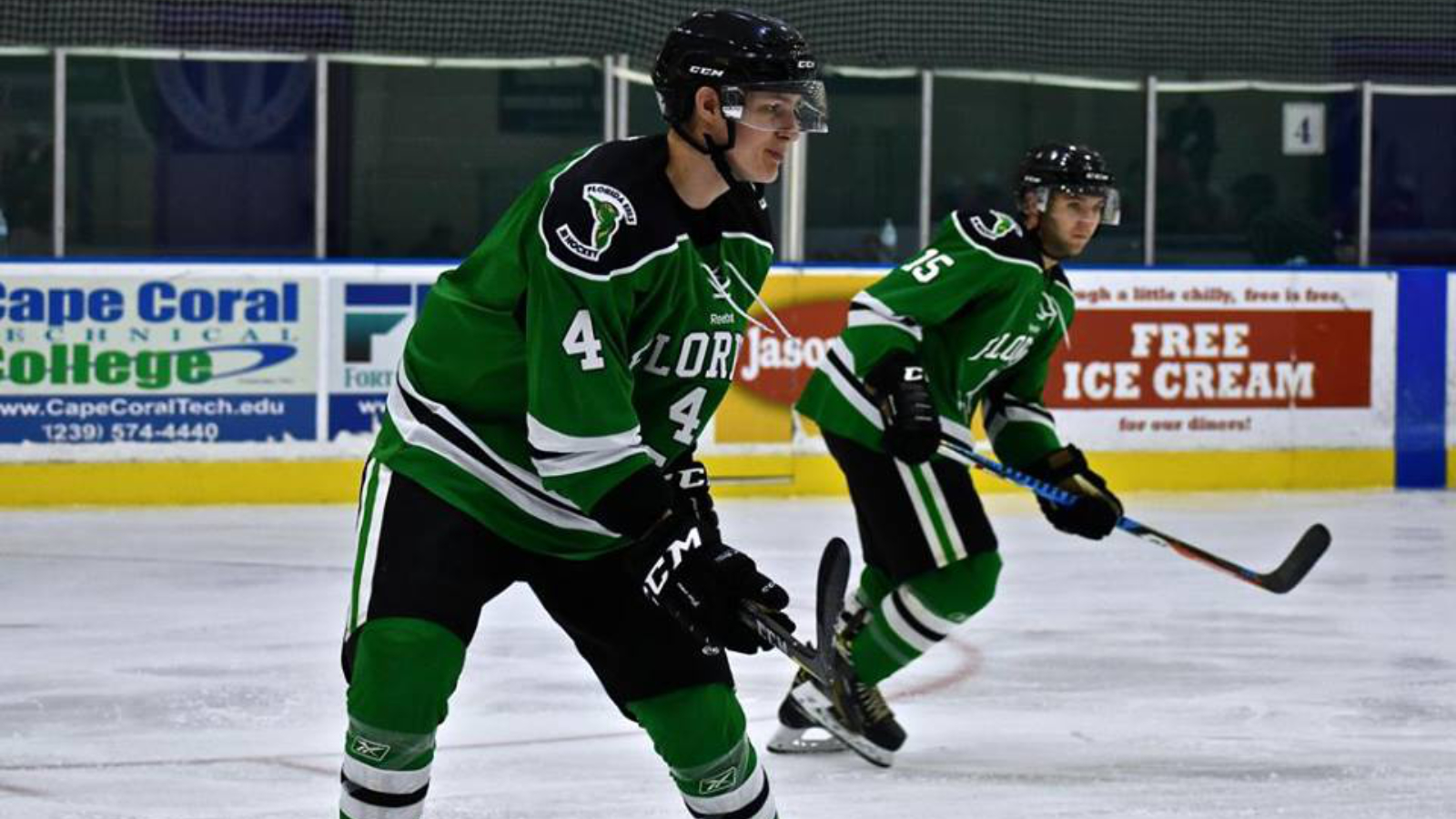