They’re lining up along the glass to watch the United States Premier Hockey League, and they have a ton of NCAA Division 1 and Division 3 company.

The USPHL’s playoffs have ended in the Midget Divisions, and will begin in March in their top junior division, the National Collegiate Development Conference. As March began, there were a lot of success stories, including numerous in-season NCAA Division 1 commitments and almost daily NCAA Division 2 and 3 commitments across all of the USPHL Divisions.

College coaches have spoken, and they like what the league has to offer. In the NCDC, you can find older elite talent drawn to the tuition-free development model. The Premier Division is also full of junior veterans who are pushing to continue their hockey careers at the collegiate level.

The USPHL Elite is a strong feeder league for the higher junior levels, especially for the Premier Division, though there have been college commitments out of the Elite, as well.

The USPHL’s 18U and 16U Divisions are growing stronger and stronger every season, with five of the USPHL’s Division 1 commitments coming from the Midget level.

Ethan Roswell just gave his “yes” vote to Division 1 Bentley University on Feb. 7, and he certainly believes in the USPHL as a top destination to earn a college commitment.

“There is no better recruiting area than the NCDC. We’re all out here [in the Northeastern U.S.], and so are the colleges,” said Roswell. “It couldn’t be a better fit. It was tuition-free, so that was definitely attractive to me and my family, but it was also about coming back to a Boston Junior Bruins organization that was ranked near to No. 1 in putting guys to the next level.”

“The teams – the Jersey Hitmen, Skipjacks Hockey – are all great competition,” added Shane Pinto, a member of the Selects Academy at South Kent School 18U program, who played in the USPHL 18U Tournament of Champions. He is committed to the University of North Dakota for 2020-21. “It’s been a great league so far with great exposure. I’ve really enjoyed it.”

Nate Hanley is one of the three Division 1 commitments out of the USPHL 16U Division this season, committing to Northeastern University for 2021-22. Hanley suited up this year for the P.A.L. Jr. Islanders 16U squad.

“It’s a good league with good competition. It definitely helps improve my game, playing these strong teams,” said Hanley. “With the P.A.L. Islanders, I get a lot of skill work and a lot of practices, and that helps me improve my game, as well as a lot of off-ice training.”

Dylan Gast played for the first-year USPHL Premier team the Minnesota Moose this year. He recently became the Moose’s first NCAA commitment, giving his OK to Gustavus Adolphus University. Gast is a prime representative of the success of the Premier Division.

“I was released from my Tier-2 camp, and I had played against the Moose coach last year [in a different league],” said Gast. “I had no idea of what to expect in the USPHL, as I was just going to play for this coaching staff, but so far throughout the year, I’ve really enjoyed playing for the Moose in the USPHL.”

NCDC - The Place To Be

The USPHL is known for its many Showcases throughout the year, including the huge USPHL Winter Showcase, the Junior Bruins Shootout, and the Islanders Hockey Club Showcase to name just a few.

These must-see events always draw scouts from across the college pantheon, but even at regular season head-to-head games, Northern Cyclones defenseman Coby Mack has been impressed with the NCDC’s ability to draw scouts. Mack committed in January to the U.S. Military Academy.

“The league I was in while in Canada always played their games Fridays, Saturdays and Sundays, but the colleges are all playing their games then, too,” said Mack. “Here, the USPHL puts games on Sunday nights, Wednesday afternoons – convenient times for colleges. We’re also in convenient locations for the Northeastern colleges. They can drive 1 hour or less to watch you.

“There hasn’t been a game where I haven’t seen a school in the stands,” said Mack. “I know that I and my teammates have all benefited from that.”

Mack said the commitment to West Point happened quite fast, as the college first reached out to the Cyclones coaches.

“Over their break, they kept watching me and watched me throughout January. It is a military academy, and so I was a little hesitant as far as not knowing what that entailed,” said Mack. “I went on my tour, and the staff there opened my eyes to all the opportunities that would be provided. I’m not personally looking to play 15 years in the NHL. I was looking for a great education and the chance to enjoy playing Division 1 hockey, then going to get a great job and career. They’ve done a lot of remodeling on the campus, and the academy is just incomparable.”

While Mack takes advantage of the oldest of the U.S. service academies, his NCDC opponent Tanner Palocsik (of the Jersey Hitmen) will matriculate to Dartmouth College in 2019.

“It’s just a really exciting accomplishment,” said Palocsik, a defenseman like Mack. “I’ve always dreamed of going to a school like that in the Ivy League. You can’t get much better of a school than Dartmouth.”

Palocsik said the Big Green began watching him and the Hitmen back in October.

“They talked to me after one of our games, and then a week later again, and they made me the offer,” said Palocsik. “It was a big choice in my life. It’s something you want to take your time with and make your decision.”

“Tanner is an incredible athlete. He has been a No. 1 defenseman for us all year. He always comes to the rink with a smile on his face,” said Hitmen head coach Toby Harris. “Dartmouth really likes his skating, offensive instincts and ability to defend.”

Palocsik brings with him a championship pedigree, having won a National 18U championship with the Pittsburgh Penguins Elite program. He’s been through a lot, so he feels that helps him handle the pressure of his position.

“Being a No. 1 defenseman is definitely a big responsibility,” said Palocsik. “The coaches have high expectations and get hard on me at times, but it’s nothing I can’t handle.”

The high-level coaching and parity of teams in the NCDC has been a big factor in both drawing scouts to the games, and pushing players to their limits.

“I can only speak to my team, but for our group, and as someone who has coached for the last eight years, I’ve noticed a difference that it’s more competitive top to bottom than in the past,” said Junior Bruins head coach Mike Anderson.

Within that any-team-can-win dynamic, Roswell bloomed into the player Bentley offered to play hockey for the Falcons.

“Ethan Roswell is a tremendous kid who came in two years ago, without a guarantee of anything. There were older kids ahead of him, but he worked and worked and worked,” said Junior Bruins head coach Mike Anderson. “He got better every few weeks and grew into a Division 1 defenseman. Bentley was a perfect fit for him.”

“I started with the Junior Bruins playing a split-season during my senior year at Cushing,” Roswell added. “Last year, I played for Coach Anderson on the Premier team, and now on the NCDC. I couldn’t say enough about Mike and Peter Masters and how they shaped me into the defenseman I am today. It’s great, I obviously worked a long time to get to this point [of making a commitment]. My teammates and coaches really helped me." 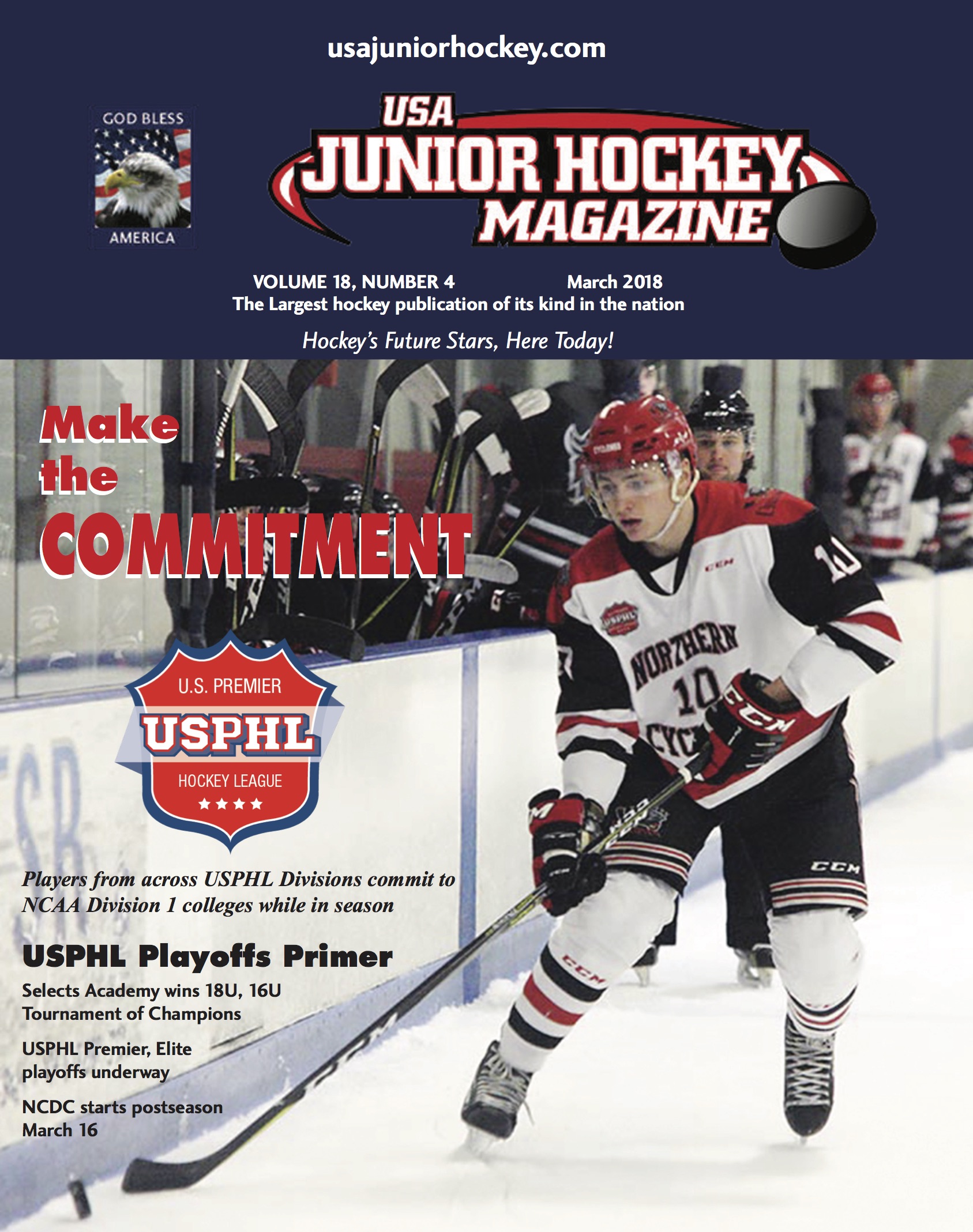 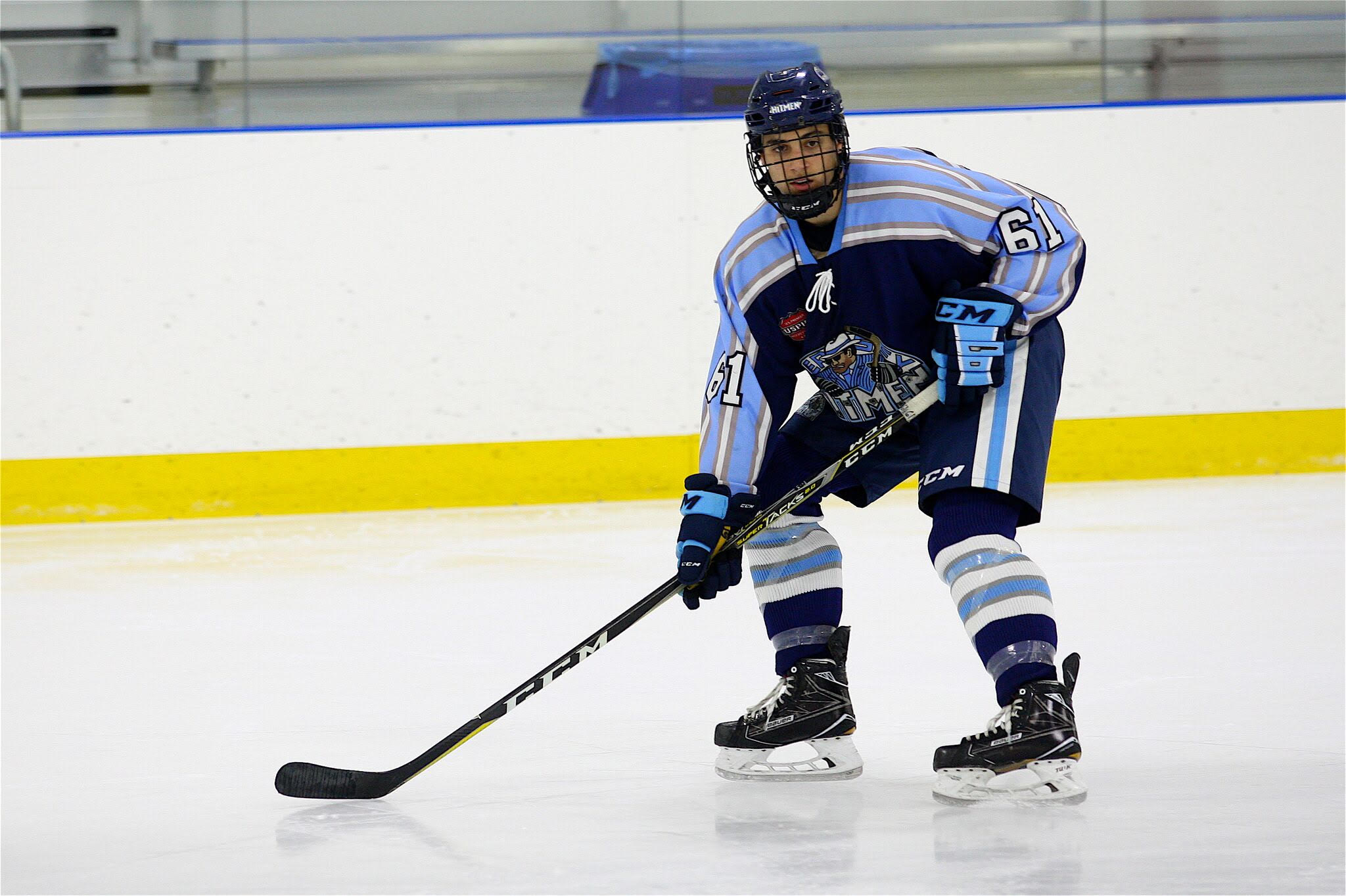 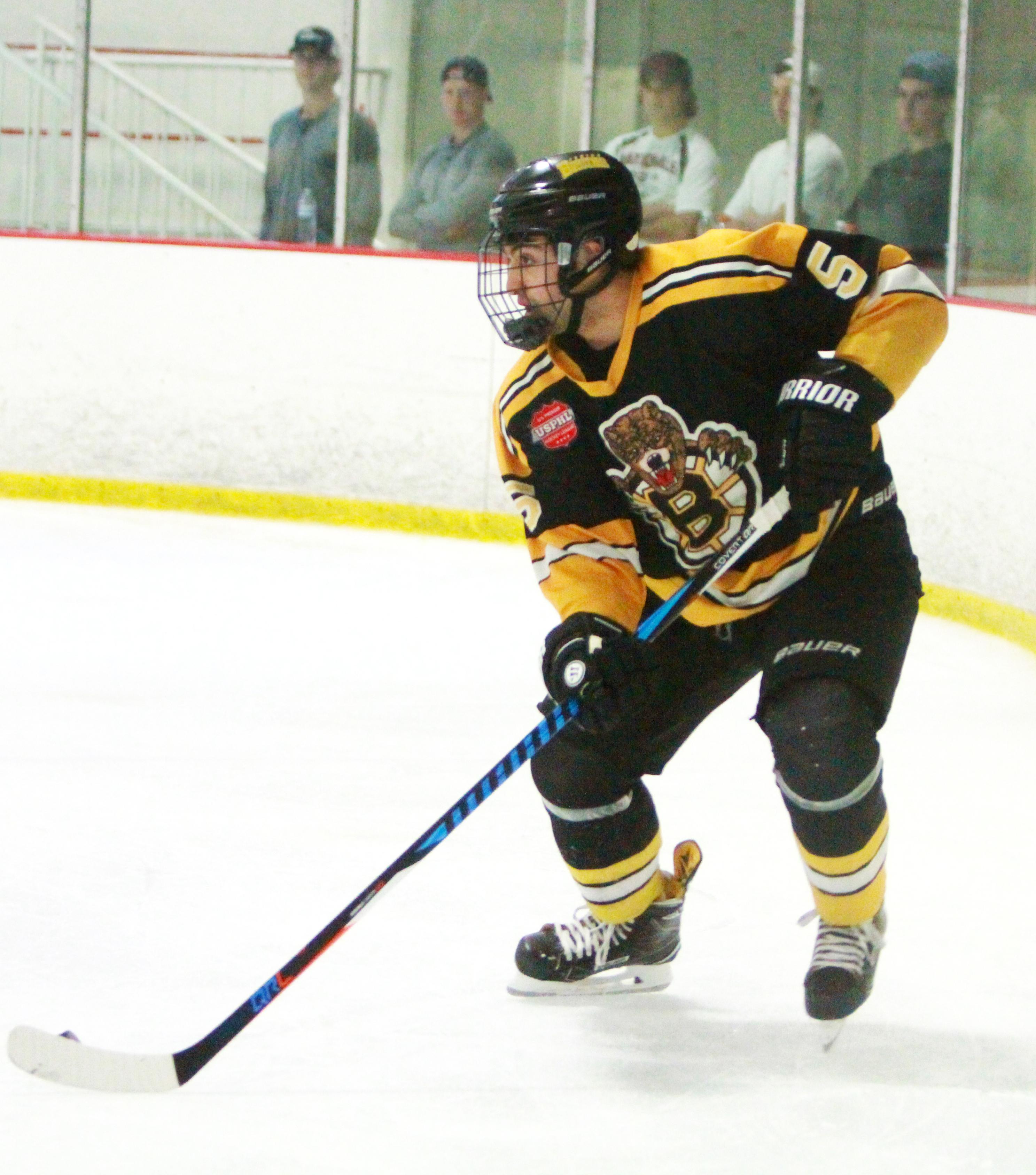 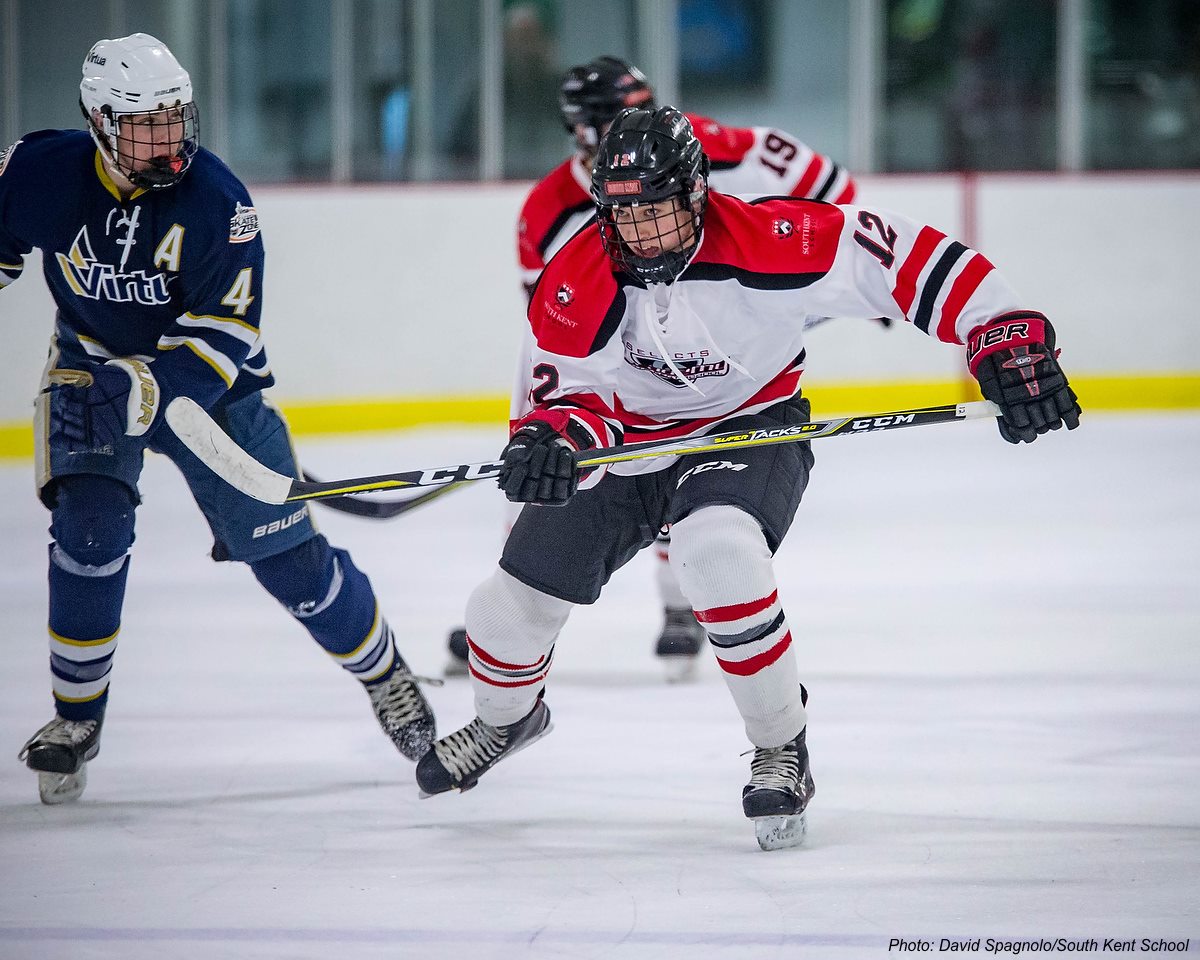 Shane Pinto is a 2000-born forward with the 18U champion Selects Academy at South Kent School. He committed this season to the University of North Dakota for 2020-21. Courtesy Photo 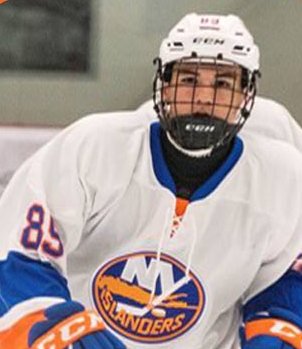 Nate Hanley is an ‘02 member of the P.A.L. Jr. Islanders 16U squad who made his commitment during the 2017-18 season to Northeastern University for 2021-22. Courtesy Photo 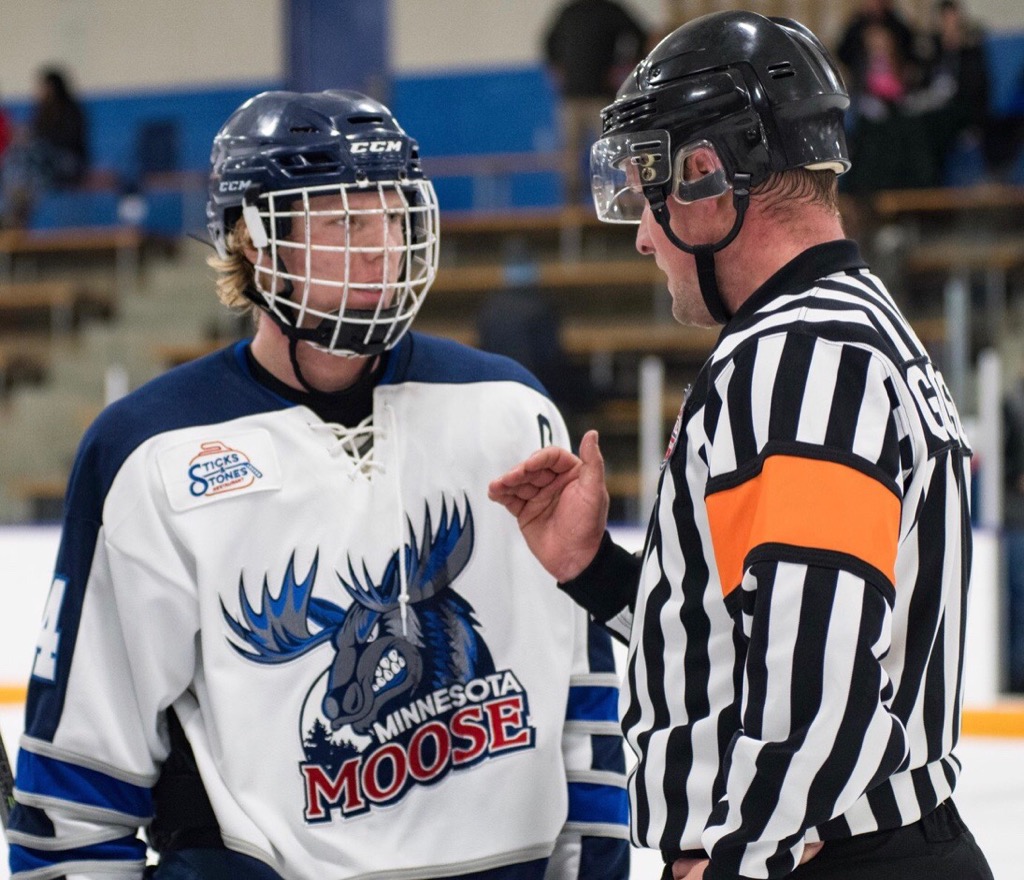 Dylan Gast, captain of the first-year Minnesota Moose, was thrilled to earn his team’s first college commitment. He will move on next year to Gustavus Adolphus University. Courtesy Photo

A league of many prospects

The Selects Academy at South Kent School’s 18U and 16U programs have been incredibly productive and have yielded dynamic NCAA Division 1 talent.

Shane Pinto hopes to be among these categories in the future, as he has committed to the University of North Dakota for 2020-21.

“Shane has all the tools to be a pro. He has a great frame at 6-feet-2-inches, 185 pounds, with significant room to grow and build on his body. He is a fluid skater with good speed. He is strong on the puck, strong on his stick, has good vision [and] can make plays,” said Selects 18U head coach Matt Plante. “As he continues to gain wisdom and mature both mentally and physically, the sky is the limit for him. His best hockey is way out in front of him.

“The things that stood out to North Dakota on the ice are his habits, the tools he possesses, and his potential,” added Plante. “North Dakota is also very impressed with the type of person Shane is. He has a great attitude, a terrific work ethic and great family values and that is something that is just as equally important to North Dakota as what he does on the ice.”

With two more seasons before he gets to Grand Forks, Pinto can now focus on becoming the best player he can be.

“It takes a lot of pressure off, and I get to just play the game,” Pinto added. “There was not really pressure before, but I can just worry about getting there.

“I would not be where I am today if it wasn’t for the Selects Academy,” he said. “I didn’t get much exposure at the program I was at before, but the coaching staff here helped me get to the next level.”

Nate Hanley, of the 16U P.A.L. Jr. Islanders certainly knows what Pinto’s talking about. He is very grateful to the Islanders staff, including head coach Bob Thornton, for helping him commit to Northeastern so early in his career.

“[The recruiting process] started when I was on the Islanders. My coach helped me through it, and talked to people for me,” said Hanley. “It feels good to know where I’ll be going in the future.”

“There are very strong programs in the 18U and 16U Divisions. This year, there’s more skill, more playmaking, and more space, allowing kids to be creative and stand out,” added Thornton. “Kids are getting college commitments and making the U.S. National Team program. The USPHL is in that mix, and we plan to build on that.”

While the USPHL Midget divisions continue to establish themselves as a prospect-rich goldmine, the Minnesota Moose have been busy establishing themselves as a first-year junior program. The USPHL captured the Premier Midwest West Division title this season, led by captain and leading scorer Dylan Gast.

“We were fortunate to have Dylan play with the Moose in our inaugural season. When we are recruiting, and looking to build a new team, we look for players with high levels of character, work ethic and integrity on and off the ice. Dylan has that and more,” said head coach Jon Jonasson. “Everyday this season, Gast has shown up and exceeded any expectations we have had for him on and off the ice.”

“I’ll be bringing speed and a fast skill set to [Gustavus Adolphus],” said Gast. “I felt this was the best fit for me, educationally and hockey-wise. I like the coach [Brent Petersen] and how he coaches, the campus itself, and I can get a good degree.”

Playing hockey and getting a degree. It’s the dream of tens of thousands of hockey players. But how do you get that opportunity to show what you can do? Whether you’re 16, 18, 20, or any age in between, the United States Premier Hockey League is the answer.