USPHL: Ferguson, Cheremeta Move Up Together With Islanders Hockey Club

Justin Ferguson can remember those early days with the Islanders Hockey Club, those days when he felt a bit like a garage door. 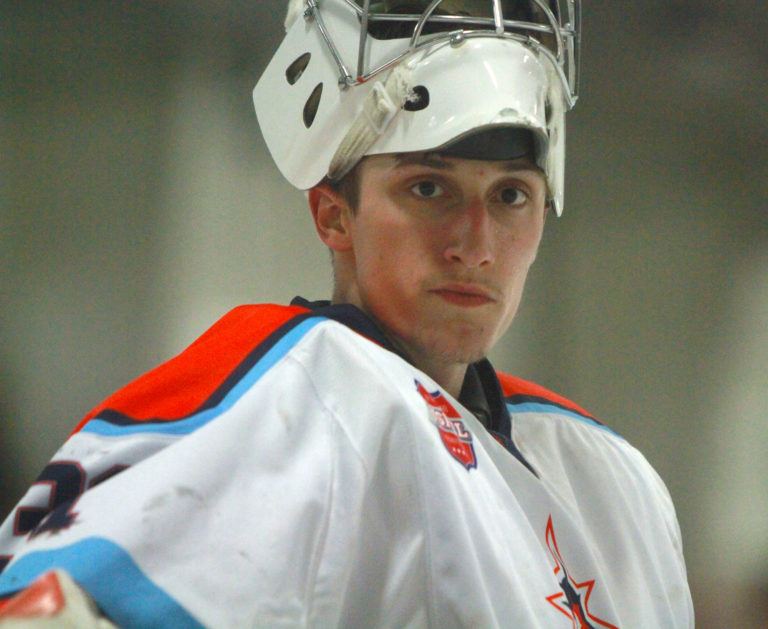 Justin Ferguson is a five-year member of the Islanders Hockey Club, and he’s getting ready for his future at Dartmouth College this year in the National Collegiate Development Conference. Photo by Joshua Boyd

“My first year with the Islanders Hockey Club [USPHL 16U team] was really rough. I was seeing 50-60 shots per game,” said Ferguson. “That wasn’t necessarily a bad thing. The Midgets are great for your development. The Islanders had a pretty rigorous practice schedule, in addition to great exposure and great development.”

The Islanders have teams at every level of the United States Premier Hockey League, and Ferguson played at five of those levels.

Ferguson started out with the 16U Islanders, moving to the 18U Islanders the next year.

He joined the Islanders at the USPHL Elite Division in his third year with the organization. From there, he joined the Premier Division team in 2016-17, then the top division available in the USPHL.

This year, he makes his final preparations for a future at the NCAA Division 1 level with Dartmouth College in the new National Collegiate Development Conference.

“One thing that keeps bringing me back to the USPHL is the local exposure,” Ferguson said. “NCAA Division 1 and 3 coaches can come to games whenever they want.”

A two-year teammate of Ferguson’s, Mark Cheremeta started out with showcase games at the USPHL 16U level, before playing a year with the Palm Beach Hawks of the USPHL Elite Division.

He channeled his time with the Hawks into a promotion to the Islanders’ Premier team last year, winning a Dineen Cup alongside Ferguson.

“I like how the USPHL divides the skill levels,” said Cheremeta. “As you go up in the league, it’s obviously better. As you develop as a player, you can fit in with those guys who are at the same skill level. Having the tuition-free NCDC, it gives the USPHL a legit junior league feel. The skill level is definitely way better, and it’s a lot more competitive than [the Premier level] a year before.

“All the USPHL coaches are really connected. When they see something good in a player, they’ll pass it on to the next guy,” Cheremeta added. “In time, it’ll give that kid a good reputation.”

In these two USPHL veterans, the Islanders Hockey Club have a forward who is in the top 10 of the league scoring race (Cheremeta has 24 points in 21 games) and one of the league’s top goalies as well – Ferguson was third in save percentage with a .933 mark.

With their teammates, they have set the Islanders Hockey Club at the top of the first-year NCDC with a 20-1-0 record at the Thanksgiving break. 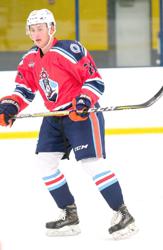 Mark Cheremeta rose through the ranks of the USPHL, playing in league showcases as a 16U player, skating in his home state with the Palm Beach Hawks of the USPHL Elite, and now doing well in his second season with the Islanders Hockey Club, currently in t

From Midget to Elite

“Justin is like a poster child for the USPHL,” said Islanders head coach Sean Tremblay. “He started with our Midget program under Coach Nate Bostic, then he spent a year on our Elite team, where he was named the league’s Player of the Year. From there, it was on to the Premier and now the NCDC. I’ve coached 16 goalies who have gone to NCAA Division 1, and I hold him as the best goalie I’ve ever coached.”

He was thankful to have Bostic as his head coach for both the 16U and 18U teams.

At the Midget level, Cheremeta pulled on the jersey at showcases for the former USPHL 16U league member the Wilkes-Barre/Scranton Knights, amidst his full season with his home state Florida Golden Wolves.

The next year, Cheremeta joined the Palm Beach Hawks, playing most of the season with the USPHL Elite Division team, but also with eight games in the USP3 Division.

As a testament to the USPHL Showcase Series, Cheremeta was scouted by Tremblay during his time with the Hawks when they played in New England.

“At the time, I was smaller, 5-5 or 5-6, but I used that size well. I learned how to protect the puck and I found out how to play with older players, to make quicker plays,” Cheremeta added.

Ferguson and Cheremeta were both in the USPHL Elite Division that 2015-16 season, and Ferguson actually rode his experience that year to his NCAA Division 1 commitment with Dartmouth. The Elite Division of 2015-16 held the same spot on the developmental ladder as the current Premier Division.

“The Elite level was definitely a step up, not necessarily skill-wise but definitely in terms of speed,” added Ferguson. “The commitment came out of nowhere. Just over that summer before my first year with the Premier team, [Dartmouth assistant coach] John Rose saw me at a summer combine. He talked to Coach Tremblay, who said nothing but good things.”

“There’s no question in my mind, he’s a legitimate starting goalie as a freshman [next year],” said Tremblay, in November. “Not many freshmen get to do that across the Division 1 landscape.” 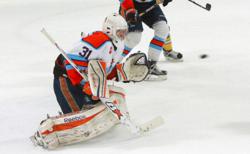 Justin Ferguson has skated for no other USPHL team than the Islanders Hockey Club, starting at the 16U level and now with the NCDC team. He is bound for Dartmouth College next fall. He is seen here during the 2017 Dineen Cup championships against the Bost

Tremblay certainly liked Ferguson enough to make him the last line of defense for the eventual 2016-17 Dineen Cup champions at the USPHL Premier level.

“He just doesn’t get beat. When he was on our Elite team and they were OK, he had a 1.61 goals against average,” said Tremblay. “He moved to us last year and I really feel he’s the reason we won the Dineen Cup.”

“Our [Premier] team had a lot of heart and a lot of character. I knew we could [win the Cup] from the start of the season,” Ferguson added. “It was a little nerve-wracking, playing for Coach Tremblay and knowing his legacy and the connections he has in the game. But he came up to me at practice and said ‘This is your net, be confident.’ That changed my game.”

Cheremeta’s game has taken a giant leap from last year’s Premier Division to the NCDC this year.

“Mark does things that NHL players wish they could do on a regular basis. He comes down on the net with the skill of a Pavel Datsyuk,” said Tremblay. “He can score, he can make plays. He plays the game a little differently. He has a Red Army way about him, a good East-West game. How he doesn’t have a Division 1 commitment right now baffles me.”

“I couldn’t be more thankful to the Islanders,” Cheremeta said. “My development has been through the roof, just through practices and the way Coach Tremblay coaches. It’s all about development. We have the ice open all the time. You can skate when you want, and shoot when you want.”

Ferguson is certainly thrilled to be bettering his game with the NCDC Islanders.

“So far, this has definitely been the toughest of my five years with the Islanders. Last year, I developed well and trained hard for it,” said Ferguson.

“With the NCDC, Justin gives us a chance to win every night,” Tremblay added.

Ferguson looks back on his USPHL climb and is thankful to have done it with the same team.

“It has been a long journey. I guess the biggest thing I could tell younger players is to put your trust in the right people, and develop great relationships with your coaches,” he added.

Tremblay praises both players for trusting the process and following the different levels upward, and he feels that’s a big reason for their current success in the NCDC.

“We have what we call now the ‘Cradle to College environment,’ but that doesn’t mean it’s easy,” said Tremblay. “Kids want to go from Team X to Team Z, without going to Team Y.

“Ferguson and Cheremeta never missed a beat. They didn’t try to skip rungs on the ladder, and they did what they were asked time and again,” Tremblay added. “They did things the right way.”