Every time Matt Drake pulls on his Assumption College jersey, he is thankful that he once did the same with a Jersey Shore Whalers jersey. 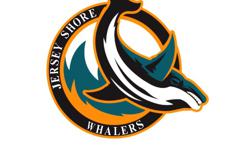 “The Whalers were really instrumental in getting me into college hockey. They helped get me to the Islanders Hockey Club [in 2015-16]. Even when I was with the Islanders, they kept in touch with me and used their contacts to help get me into Assumption,” said Drake, a ’96 defenseman with the Division 3 college squad. “They were always good in teaching systems, as well, which we still use a lot in college.”

Last year, Drake joined former Whalers teammate Logan Fredericks as being the Whalers’ first two alumni to reach the NCAA ranks. Fredericks has averaged better than a point per game with Wisconsin-Stevens Point, a team program was just coming off a Division 3 National Championship when he joined their ranks.

General manager Jay Lampiasi sees Drake and Fredericks as just the tip of the iceberg for a still-new junior program, one that he helped start in 2013 in association with the 40-year-old Brick Hockey Club youth program.

“We are happy we’ve grown this fast,” said Lampiasi. “Originally, we started with just a Midget program. In the course of four years, that’s turned into two junior teams and three Midget teams, all playing in the United States Premier Hockey League.”

Those programs also help these players get ready for full-season junior hockey, typically with the Whalers’ two teams. The Whalers junior program, which began in 2014-15, develops players out of high school into higher-level athletes ready to move up the junior ladder or, potentially, straight into NCAA college hockey. 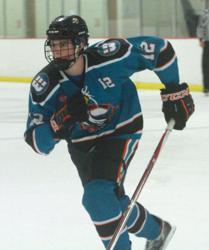 Simon Fitzgerald, a 2001-born resident of Shrewsbury, N.J., is working his way up the junior ranks, playing this year for the Jersey Shore Whalers’ USPHL Elite team. Photo by Joshua Boyd

“For us, it is all about development. The end result is that not everyone is going to make it to NCAA hockey. However, we focus on the development of each individual player,” said Lampiasi.

After operating on a full-season schedule for the first couple months, the Whalers Midget teams generally practice twice a week over half the ice once late November comes around, allowing players to join their high school teammates. They have Midget teams in the USPHL 18U, 16U and 16U Futures divisions currently in 2017-18.

“We just ask our Midget players for a commitment to showcases and playoffs. We want to keep the options open for our Midget players,” said Lampiasi, who is proud to say that 19 out of the 40 All-Stars in the Shore Conference of New Jersey high school hockey were Whalers players.

However, the Whalers want every one of their players to aim higher than being a high school all-star, and the results are starting to show, with Drake and Fredericks as major cases in point.

Former 18U Midget and junior player Ryan Lambert is skating in the tuition-free National Collegiate Development Conference for the P.A.L. Jr. Islanders.

Robert Feathers, a former 18U player who joined the Whalers from Aberdeen, Md., is skating and putting up points with the Eastern Hockey League’s Vermont Lumberjacks this year.

Internal advancement is certainly very important, as four former 16U players are with the Whalers’ USPHL Premier team and eight more are with the 18U squad this year.

Jumping out of the gate

The junior program set out running, joining what was then the USPHL Empire Division in 2014-15 and making the playoffs that very first year.

“Our junior program has had three really good years. We were in the Empire, which became the USP3 Division, and that was basically designed for local players who were going to community colleges and were looking to finish their Bachelor’s degree at a university,” said Lampiasi.

Drake and Fredericks were on that inaugural junior team.

“I grew up in the rink they were founded at. I played club there and then I joined the Whalers,” Drake added. “We made playoffs, so for an inaugural junior team, we did play well and we learned a lot along the way. I came in and became a more defensive player, and they helped me out with my offensive abilities, as well. Coach Kevin Kolbenschlag was especially a big help with my defensive game.”

This past fall, the team was awarded a USPHL Premier team, just one step below the top level of the NCDC.

“Incorporating a Premier team opened up a whole new avenue, and we had to start recruiting. We could not rely on just local talent. That said, we still pride ourselves on bringing in as many New Jersey kids as possible who have that talent,” said Lampiasi.

“We stepped into it and it has been an eye-opening experience.”

After a bit of a tough start for the first-year team, the Jr. Whalers were starting to pick up steam, going 5-1 in their six games just entering December. That included a four-game winning streak.

“With players coming from all over the country the team is starting to gel and settle into the systems we play,” added Lampiasi. “We’ve added goaltender Kevin Lake, who started the season in the NAHL, and acquired local boy T.J. Hawkins and [Czech national] Lucas Kucera in trades. They are contributing to our turnaround. Both started in the NCDC [Hawkins with the P.A.L. Jr. Islanders, Kucera with the New Jersey Hitmen].”

A big addition to the Whalers’ overall coaching staff has been longtime NCAA Division 1 assistant coach Scott Garrow. He spent 12 years with Cornell University, along with stops at Western Michigan and Princeton. He is assisting the 18U team’s head coach Anthony Matarazzo (a NCAA Division 1 scout) to help train those younger players better for tougher competition ahead in their junior and college careers.

The USPHL Elite team is there to develop players for the 18U or Premier team in the following year, or to prepare players for a top ACHA squad.

“The Jersey Shore Whalers are always looking to expand the opportunities for their players. They are really committed to helping you get to the next level,” Drake added. “They helped me when I moved up to the next level. I wasn’t quite sure what I wanted to do, but they were helpful in guiding me along the way.”

“A lot of our players this year are getting looks and interest from Division 3 schools and higher levels of junior hockey,” added Lampiasi. “That’s our goal, to build our program to where players want to come to play for us. Our billet house is right on the beach, so it’s a great area for players to get the full hockey experience, but also the beach lifestyle.”

Top photo: Goalie Andrew Nogowski (‘99), out of Cinnaminson, N.J., is working on his game with the Jersey Shore Whalers’ USPHL Elite squad. Photo by Joshua Boyd