The NAHL’s Decade of Dominance

In the history of junior hockey in the United States, it would be hard to find a 10-year stretch of success like the North American Hockey League (NAHL) has had during the last decade.

At present day, the league is on pace to break that record it set a year ago, as it stood at 177 NCAA commitments as of February 1st, a higher number than at the same time as last year’s record-breaking season.

It is safe to say that over the course of the past 10 years, no other junior league in the world saw as many NCAA commitments for their players, while they were actually playing in the league.

“You look at the last 10 years… and every year we hit this new number, and you start to wonder how we’re going to hit that number again,” said NAHL Commissioner and President Mark Frankenfeld. “I think it’s interesting when you peel that 351 back and you look at the 66 percent being Division I commitments. That means theremare about 10 players on each team moving on to Division I annually. I think it is encouraging for players out there to know that half their team will earn an NCAA commitment, with the majority going Division I, in each and every season. The numbers are on their side.”

“We are producing as many NCAA commitments as we can and I don’t think it is a surprise any more than we continue to top a record-breaking number each season,” continued Frankenfeld, who is in his 13th season as Commissioner of the NAHL. “I think the commitment by our owners and the dedication and expertise of our coaches are a few of the main reasons why we have experienced the commitment success we have over the last 10 years or so. When you combine that with some very talented players who are dedicated to their training and development, in addition to a competitive and rigorous schedule, I think it has been the perfect mix to watch the NCAA commitments rise each season.”

- 34% of NCAA Division I freshmen this season are NAHL alumni 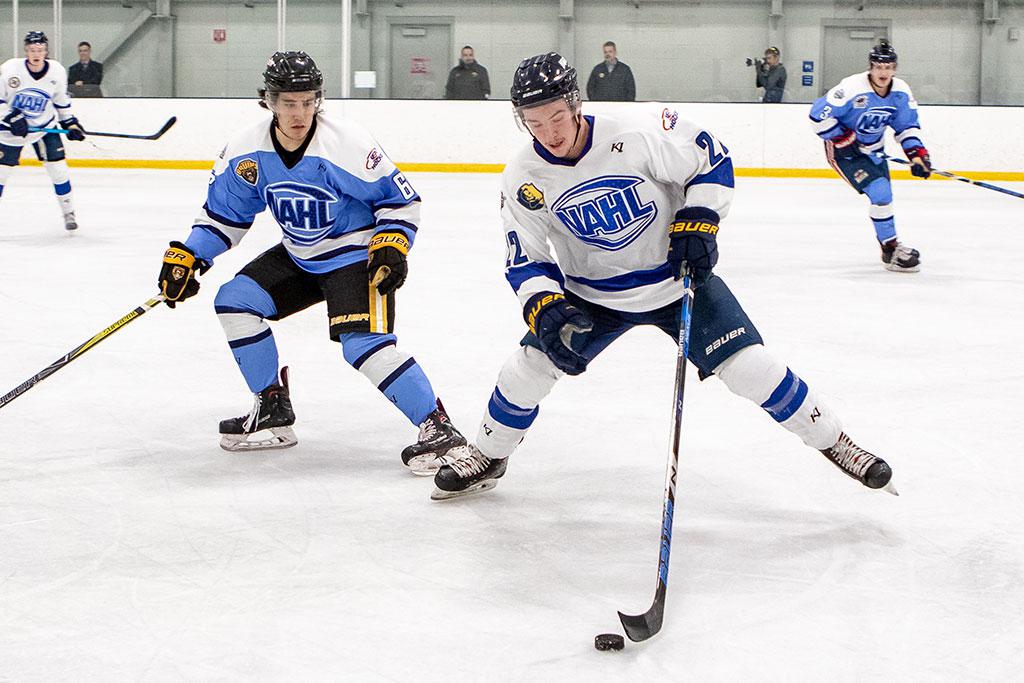 Under Frankenfeld’s direction, the league has produced an unprecedented number of advancements to the NCAA, along with dozens of NHL Draft picks. Frankenfeld has set the foundation for continued success, expanding the footprint of the league to 27 teams representing 16 states in 2020, allowing the league to continue to grow and truly become America’s only ‘national league’ when it comes to junior hockey.

The recipe of success for the NAHL is simple and it starts with having the right ownership in the right markets. Thanks to 27 markets and communities than span from coast-to-coast in 16 states, the stability and scope of the league has never been better. Owners are hiring the right coaches and allowing them go to work in building high character and talented players.

The success has vaulted the NAHL into one of the two best junior leagues not only in the United States and USA Hockey, but perhaps North America as well.

The NAHL has also recently benefitted from its enhanced, long-term partnership agreement with USA Hockey that has improved the junior hockey development program in the United States. As part of the enhanced partnership, USA Hockey as provided additional resources to the NAHL to continue to improve all facets of the league, including player development, coaching, officiating, international competition, and overall visibility.

The NAHL has seen the benefits of this enhanced partnership thanks to its partnership with the United States Hockey League (USHL) in regards to player movement and the league’s annual inclusion in the Sirius Ice Hockey World Junior Cup.

The NAHL is the only Tier II junior league within the USA Hockey landscape. The NAHL along with the Tier I USHL, have been working side-by-side with a cooperative framework on player movement between the two leagues, The agreement between the two leagues promotes the Ladder of Development in junior hockey, and provides for greater developmental and advancement opportunities for players.

“The North American Hockey League is a vital part of the ladder of development in our country,” said Pat Kelleher, executive director of USA Hockey. “We’re excited about what they are currently doing to develop players and we look forward to continued collaboration with the league in all areas of the game.”

This past summer, the NAHL was on the international stage for the first time in several years when they sent a team to Sochi, Russia, to play in the Sirius Ice Hockey World Junior Cup. The team was one goal away and lost in the tie-breaker from advancing to the Semi-Finals and finished with a 3-2 record on the trip.

“There are a lot of great people in USA Hockey doing some great work. As the top junior leagues in the United States, the NAHL and USHL are doing our part to work together to develop, promote, and advance players to NCAA hockey and beyond,” said Frankenfeld. “Seeing NAHL players represent the United States on the international stage was a great experience and continues to be a great opportunity for our league to take part in the prestigious event. It is another great example of the NAHL defining itself as the League of Opportunity, as we continue to provide our players with an experience they can only get while playing in the NAHL.”

“We work very hard to continue to move our sport forward in a very positive way. The NAHL is where it is today because of our committed ownership and their focus on providing players top-quality coaching, skill development and community-supported teams in stable markets, and one-of-a-kind events that provide unparalleled exposure,” continued Frankenfeld. “Not only are we seeing more players getting committed earlier in the season, but that then opens up the opportunity for even more players to earn an NCAA Division 1 commitment at the Top Prospects Tournament. There is no other event like it anywhere and it has developed into one of our marquee events each season. 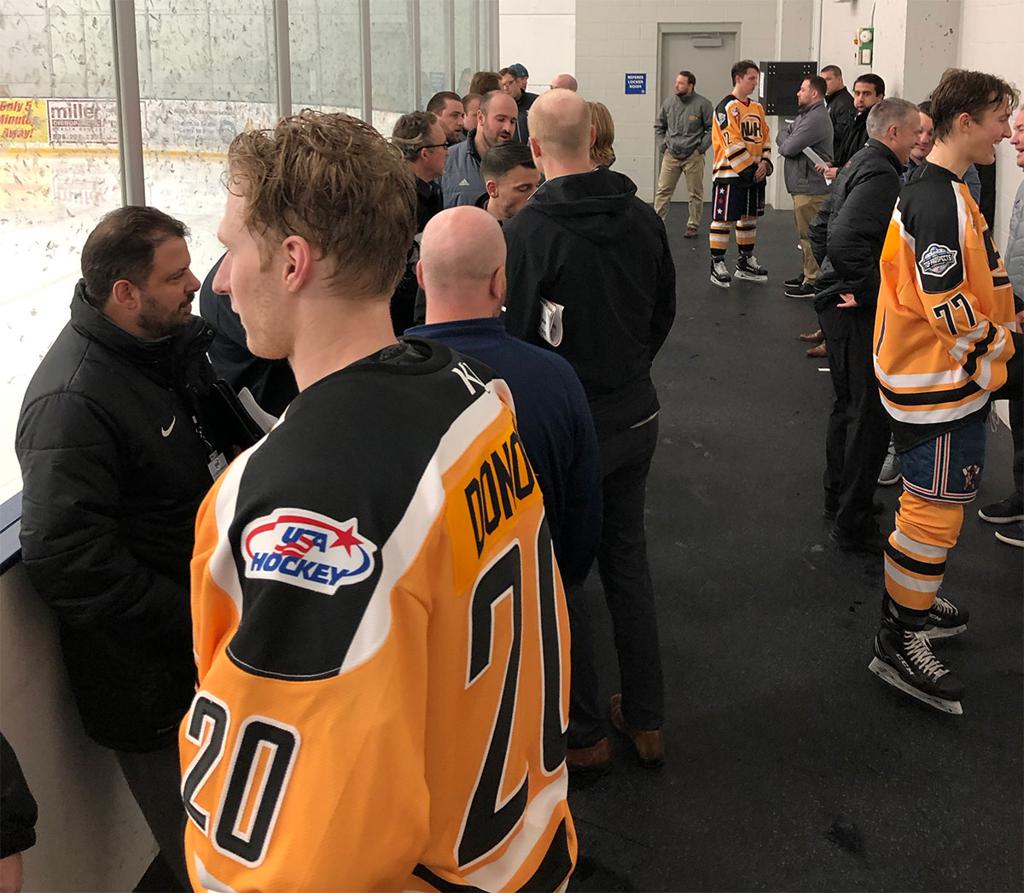 While the NCAA commitments every season continue well into the summer, the peak of commitment season is the annual NAHL Top Prospects Tournament in February, which in 2020, will return to the East Coast at the New England Sports Village in Attleboro, Massachusetts.

The NAHL Top Prospects Tournament is one of the most highly-scouted events in junior hockey. Last season, over 220 scouts attended the event in Attleboro, which featured almost every NHL team and NCAA Division I school. It continues to be an important part of the NAHL event model, which includes the NAHL Showcase in September and the NAHL Robertson Cup National Championship in May.

The NAHL Top Prospects Tournament plays a big role in that success, with over half of the players who played in last year’s Top Prospects Tournament, earning an NCAA opportunity following their participation in the event. The event continues to provide the hundreds of NHL and NCAA scouts in attendance with a look at the best, uncommitted players the NAHL has to offer, as well as, some potential NHL Draft picks.

“We had a great response from scouts when we moved the Top Prospects Tournament to the East Coast last year. We received from great feedback from a variety of NHL and NCAA coaches and scouts that the level of play exceeded their expectations. With the success of the NAHL’s East Division, it is a great addition to the exposure we already get as a league and continue to help us add to the record number of NCAA commitments,” said Frankenfeld. “The NAHL Top Prospects Tournament is the most unique event we host, because its sole purpose is to provide those players that are still uncommitted a great opportunity to play in front of hundreds of NCAA and NHL scouts for a chance to make a great impression and earn an NCAA commitment or get drafted into the NHL.” 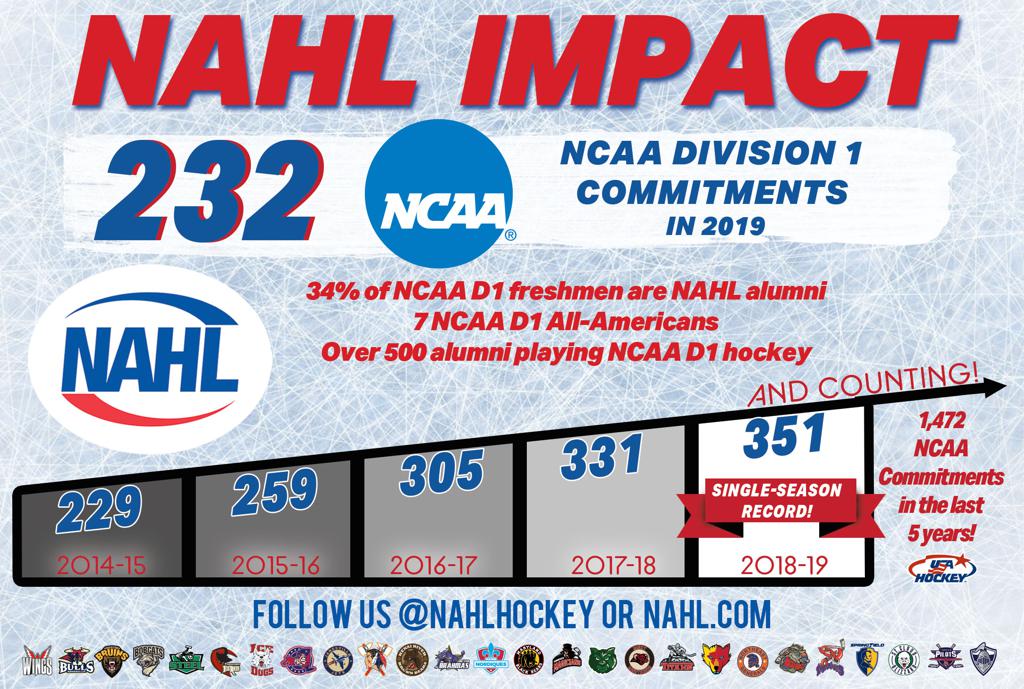