Veteran, newer USPHL coaches chime in on the meaning of the word in hockey

BOSTON, MA -- “We’ll develop you into the best player you can be.”

“This is the best team for development.”

These are common phrases used at essentially every level of hockey below the collegiate level. Every player wants to play at the highest level available to them, and in order to do that, they must develop their physical skills as well as their mental game. Nowhere else in the U.S. are there more opportunities for development than in the United States Premier Hockey League and Eastern Hockey Federation, with multiple levels of hockey at every stage from Mite to Juniors.

But what does this word “development” really mean?

The USPHL/EHF features coaches and team principals ranging from those with decades of experience - including at the highest level of the college game - to younger coaches passing on their hockey lessons not long after coming off the ice themselves.

These coaches have slightly different variations on the meaning of the word “development,” but they all agree that its definition could fill volumes of dictionaries when it comes to the sport of hockey.

One of the USPHL coaches with one of the most accomplished resumes, Jim Hunt is the President of the Jersey Hitmen, who offer EHF and USPHL hockey from Youth through Midgets and up to the tuition-free Junior level.

Hunt is also a former NCAA Division 1 head coach (at Fairfield University), and he has worked in the past with USA Hockey for the U.S. National Team Development Program and in the implementation of the American Development Model (ADM) in the Atlantic District.

“The word ‘development’ has been hijacked and compromised in all of sport, not just hockey,” said Hunt. “In my opinion you can’t opine on development without putting it in the context of long -term athlete development.”

He sees the combination of nature andnurture playing a role in development. He points specifically to how a player matures physically through the late adolescent/early teen years, while being supported by strong but supportive parenting.

“The healthier dose of each, the further along an athlete will likely go,” Hunt added.

On the other end of the coaching experience spectrum, Hudson Havoc head coach Brett Wall just finished his NCAA Division 1 playing career at Lake Superior State University in 2013, and retired from his pro career in 2016.

His view of the word development matches Hunt’s in some ways, including the idea of nature-meets-nurture in giving players the correct set of physical and mental tools to excel.

“Development in hockey means that the player has obtained and acquired the tools to be able to play or make the jump to the next level,” said Wall. “The ‘next level’ may be as simple as mastering forward skating and then learning to skate backwards. Or even making the jump from the USPHL Premier to the NCDC. During this development process, the player is able to learn and understand the preparation and detail needed to be able to perform the task or compete against other players who have mastered it as well.”

Frank Scarpaci founded a junior hockey team in one of the places less associated with hockey than the Northeast or Midwest - the Gulf Coast of Florida. From Fort Myers, Fla., his Florida Eels have sent nearly 250 players on to all levels of college hockey since 2001.

Scarpaci was also president of the governing body for amateur hockey in Florida for nearly 10 years, and a member of the USA Hockey Southeast District Board of Directors, giving him experience on the youth side of the game, as well.

While Scarpaci certainly doesn’t dismiss nature as a factor in determining who has the physical wherewithal to be an elite athlete, he says the real key to development in hockey is training, training and more training.

“Whether you want to be a gymnast, a pianist, a violinist or a hockey player, it is all about training,” said Scarpaci. “The training has to be systematic and continuous. You cannot develop as a hockey player at the highest level by going to pick-up games or stick and puck. You need to be in a dedicated program, where you are on the ice every day five days per week and not just for the first month. It has to be every day five days per week for 35-40 weeks.” 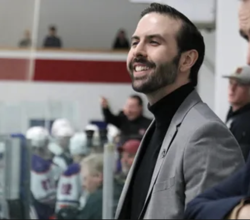 Brett Wall stepped behind the bench of the USPHL Premier’s Hudson Havoc after a four-year NCAA Division 1 career at Lake Superior State University and a three- year professional career. (Photo By Joshua Boyd)

Scarpaci’s focus with the Florida Eels is the on-and off-ice development of young men from 16 to 20 years old. Having two teams (Premier and Elite) helps him to focus all of his organization’s energy on that age group, while Hunt’s Jersey Hitmen have a broader mission and infrastructure, with the staff to work with players from ages 8-20.

Hunt’s work in bringing the ADM to the Mid-Atlantic states has given him special insight into the development of players in those crucial early years. The Hitmen youth teams will compete this year in the newly-minted EHF South, a division of the USPHL/EHF development model.

“Hockey players are built, not bred. To build a good one, it takes a deep understanding of what a kid needs at certain points in their life. The early stages of development (8U/10U) are when an athlete’s brain is forming the fastest,” said Hunt. “This is a prime time to help players develop their hockey IQ, hone their instincts and instill a strong compete level.

“Next [at 12U/14U], a skill acquisition window opens and, used properly, that is a time when fine motor skills can be adapted to the demands of the game,” Hunt added. “During this period, players need basic fundamental execution under pressure, as they would experience it in games - line rushes, wall and net battles. All of this needs to become second nature.”

During these years, players are going through puberty and their bodies are changing at a fast rate, and with that, the game is changing around them. It gets faster and more physical.

“At the 15U, 16U and 18U levels, strength and power become more of a factor, as do contact, confidence and courage,” said Hunt. “By this point, thin- skinned players have been weeded out. Fake toughness should be identified and eliminated from a team’s culture, and replaced with respect for opponents, teammates, and the game.”

This is also a crucial time to make a commitment to keeping the game going into your 20s and possibly beyond. For the truly elite athlete, this means being religious about everything from diet to rest periods to a consistent and systematic off-ice training program if one is to develop their game into the full- season junior model.

That is, if they’re not already there - those under 18 who are already in Tier-1 or Tier-2 junior hockey are typically the cream of the crop. Those players of this age who likely (or already) have NCAA hockey in their future have taken to heart a term that is the fraternal twin to development - “preparation.”

The Havoc’s Brett Wall knows preparation well. He understands what NCAA colleges are expecting a player to do around the clock - and around the calendar - because he was in that position earlier this same decade.

“The development of each individual player’s preparation allows them to find and figure out a routine or approach they can use to allow themselves to be successful in each practice, workout, and game,” said Wall. “When you are feeling confident due to your preparation, it allows for players to become comfortable in their game and environment, which often leads to better development, as well as overall success.”

Both Hunt and Scarpaci certainly agree that when a player reaches that junior hockey level (17-20), dedication to the game is key to development of everything from on-ice and off-ice skills to making education the pivotal factor in deciding where to continue to pursue their academic and athletic goals.

“Too many programs train only three days per week and off-ice is optional. At the junior level, that is unacceptable,” Scarpaci said. “To be successful, we’re talking 4.5-5.5 hours of actual training each day, which is similar to the European model. We integrate the North American model in terms of the number of games: 44 league games, plus we add 10 scrimmage games and up to 16 postseason games.”

While all of this needs to be monitored and tracked, it really is up to the player to manage their own development to a point.

“Too many coaches like to over-coach. They stifle player development,” Scarpaci said. “We give our players the flexibility during extra ice practices and shooting every day, and 10 extra games to be creative. What does that mean? Development.”

Over-coaching is an issue Hunt even sees at the youth levels.

“[The 8U/10U level] is a time when well-meaning coaches try to tame players - get them to stand in line, or skate routes. This is the last thing they should be doing with young kids,” said Hunt. “Embrace the chaos, harness the energy those kids bring, and use it to their advantage by orchestrating small games that recreate situations they face in games.” 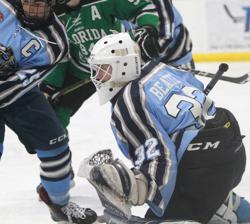 The Jersey Hitmen and Florida Eels clash in a 2018-19 USPHL Elite game. The organizations have different missions and offerings, but they both believe in offering high-level training at all age groups. (Photo By Joshua Boyd)

The USPHL junior model is designed and scheduled to focus on more training and less travel, which means more comfortable rest periods between active periods.

“Rest between training sessions and games is vital. Extended periods of time on the road tends not to lend itself to adequate recovery,” Hunt added. “Generally, the harder you train and compete, the harder you need to recover.”

There’s a theme here - these coaches are using words like “routine” and “preparation.” One term that comes to mind that links those terms is consistency. Routines are consistency, and there must be consistency in preparation. Without consistency, development falls short and athletes and teams suffer.

“The development of consistency is one of the biggest areas we strive for in development,” Wall said. “The creation of a plan for preparation and attention to detail often allows players to come to the rink day in and day out and be the same player every day. Consistency is also what allows and buys players time to be able to continue to develop by getting them more ice time and giving them opportunities to stick at the highest levels to compete against the best players.”

Consistency does not mean complacency. For instance, the Florida Eels schedule their scrimmage games against ACHA college club teams to challenge their players.

“In those games, we require our players to come out of their comfort zone,” said Scarpaci.

Dealing with adversity is another key to development.

“Being able to help kids deal with the adversity that the game brings is a critical piece of their development,” Hunt added. “They won’t always make the AAA team or the All-Star Game.”

Development in hockey is not just a word, it is a concept, like the term “universe” is to astronomy.

A hockey bag is the best analogy here - and the equipment going into that bag includes nature, nurture, preparation, consistency, attention to detail, creativity, adversity, dedication, patience, and the most important: Love for the Game.

You have to want to be at the rink and you have to want to take your game as far as it can go. “This process requires a serious degree of commitment because it will take 10- 12 years to accomplish,” Hunt said. “Before you run the race, know where the finish line is.”