LACONIA, NH -- When results are less than expected in any project or endeavor, adjustments need to be made and thus was the case for the New England Wolves.

Upon the conclusion of a less than stellar performance in the 2016-17 season, the Laconia, New Hampshire based organization created the “Den of Development”, a concept created with the total development of the players in mind.

In that, this new development program initiated by the Wolves would focus not only on hockey skill development, but also was created to assist in overall physical development and positive mental skills enhancement.

“We changed the development model in the fall of 2017,” explained Wolves General Manager and EHLP coach, Andrew Trimble. “In 2016-17, the EHL (Eastern Hockey League) team finished the season in last place. We changed the model when Coach (Tim) Kunes and me teamed up. Since that time, we have had back-to-back nearly 20-win game seasons at the EHL level. Our EHLP team has made the playoffs both years and this past season we won the championship.”

The Wolves EHLP team defeated the Philadelphia Little Flyers 4-2 to capture the EHLP title recently and the first championship for the organization.

Prior to the initiation of the Den of Development program, the Wolves’ management considered a series of factors during the planning process, offered Trimble.

“We wanted to take the perspective that everything begins with the focus on player development. How can we get our players better? Is this (plan) going to make our players better by doing this and will this improve the kids in our room?”

While the development of players is a core concept of any junior hockey, it is especially critical to the Wolves as they do not have a large local youth hockey program available to them as a source for new players and, thus, must make the total development of the player a primary component of their organization.

“We’re two years into this thing and we’re seeing some great results. That’s the most exciting thing about is. We are seeing the fruits of our labor.”

That “labor” Trimble refers to, is a centered around a “hockey-specific” training regime.

“We wanted to work on a hockey-specific workout program and Coach Kunes has worked hard on that and developing a strategy,” explained Trimble. “We have five days of work outs and they progress throughout the week from leg day, to upper body day to our yoga day.”

Angela Pickowicz provides the yoga instruction to the team, is a nutritionist, palates instructor and is with the team weekly.

An expansion of space available to the Wolves has permitted the Den to provide an improved experience for the New England organization as well.

“We’ve been able to purchase space and create a new Wolves’ Training Center. It has synthetic ice, a players’ lounge and has been a nice expansion to what our footprint was before,” described Trimble.

An extraordinary opportunity is provided by Dave Pollak, the team’s academic advisor. Pollak responsibilities include assisting in getting high school kids into their on-going curriculum, obtaining tutors and performing other traditional requirements of the advisor role.

But the Wolves’ academic advisor goes beyond those conventional tasks of his role and offers peak performance training to the players.

“The kids get in a room on Friday and they talk to Dave. They do it among their teammates and there is a great team-building component that comes out of it. They get to get away from the coaching staff and it instills confidence. It creates a tight knit component to the group.”

These performance improvement sessions begin in the early season and continue throughout the entire season.

The bonding result of the Peak Performance sessions Pollak provides may be especially important to the players as a very large number of them billet in the Laconia community.

“Almost every one of our kids billets,” Trimble assessed. “We have kids coming from all over the world. That creates a unique dynamic. These kids don’t know each other when the arrive here and we have to build from the ground and work up. We are starting to see success from the development model.”

Ice time, of course, is another critical element the Den of Development and the Wolves’ are afforded plenty.

The Wolves provide their players two ice sessions per day and, included among those sessions is a skill-development opportunity offered on Tuesday mornings by Kunes.

Kunes, a Boston College alumnus, and former professional player honed his coaching skills after playing for several renowned coaches. Included among that list are Boston College’s Jerry York and Greg Brown, Garry Dineen and Lincoln Flagg of the New England Junior Falcons and Petter Thoresen of the Norwegian National Team.

Among the Wolves players benefitting from being in the development program are Declan House and Latvia native Dom Marcinkevics.

“Two years ago, Declan was the youngest player in the EHL, and people were skeptical that we took him because he was so young,” began Trimble. “He has put up back-to-back 20-plus point seasons as one of the youngest (defenseman) in the league. He is getting looks from Tier II programs and opportunities from all over the country."

"We took a kid from Latvia that nobody had heard of (Marcinkevics) and he had a 60-point season, was the leading goal scorer, was the EHL Rookie of the Year while being one of the youngest players in the league.”

“There are some cases of kids that the time invested is starting to pay off and there are kids who have taken to the program and had a ton of success right of the bat. They are coming from small hockey outposts and having success.”

The largest event is the JBT Benefit game, named after local youngster, John Bradley Thompson, who endured a 10-month battle with DIPG.  In the past five years, the organization has raised $80,000 for “The Cure Starts Now Foundation”, the JBT charity.

The JBT Benefit Game is an EHL game and, during that benefit game, the arena is home to more than 500 people.

“We pack the place and there are raffles, sweatshirt sales and donations. We do a mini one-on-one challenge between periods. The kids play extra hard.”

The build-up during the week of the JBT Benefit game has several activities associated with the event for the players.

“We make it JBT Week. Jesse Thompson, John’s father, comes in and speaks to the guys. We have a picture of JBT in the locker room and we dedicate the entire week to him,” commented Trimble. “Having Jesse their has a huge impact on these kids.”

Another community service project for the players is assisting the local Lakes Region Lakers youth hockey program with the Tuesday evening practices.

“We try to have our community service projects have as big of an impact as we possibly can.”

The New England Wolves were recognized with a “Spirit of New Hampshire” award for achieving those 1000-plus hours of service.

It is clear, the New England Wolves “Den of Development” can, indeed, take a pup and advance a Wolf.

As the team prepares for the 2019-20 season, the EHL team has an impressive number of returning players and players moving up from the EHLP team. However, the EHLP team is looking for players to enter the Den of Development, be a part of the localized community service projects and reach their full potential as a hockey player. Information about the EHLP can be obtained by emailing Trimble at scoringconcepts@gmail.com. 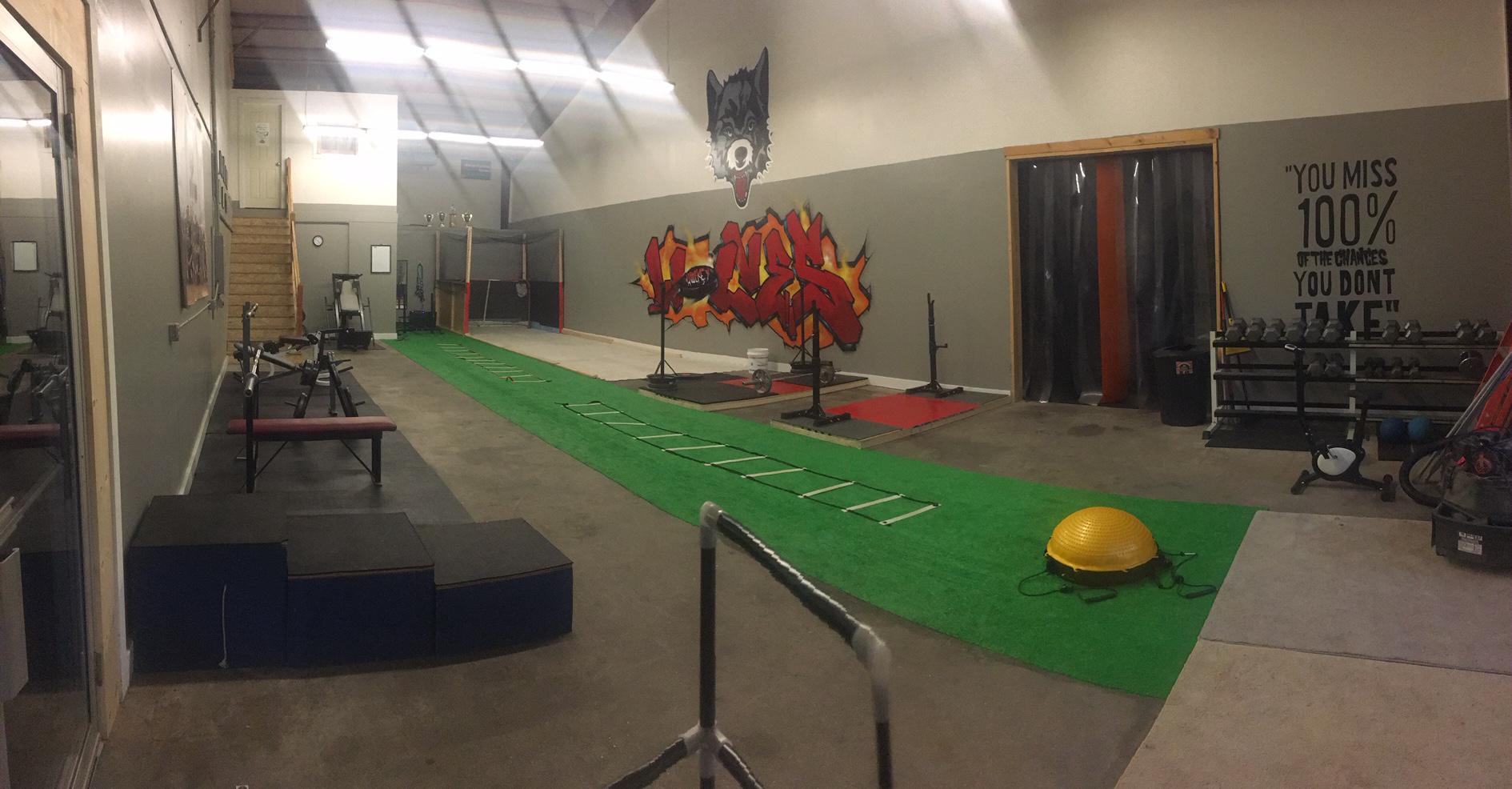 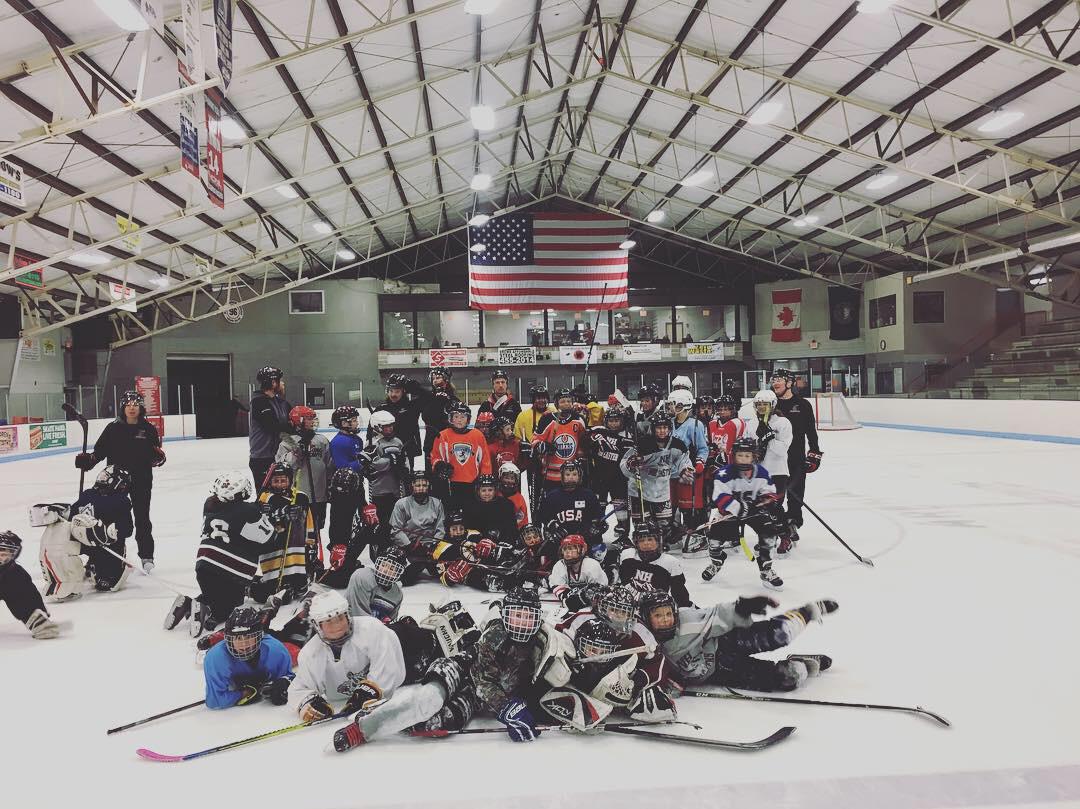 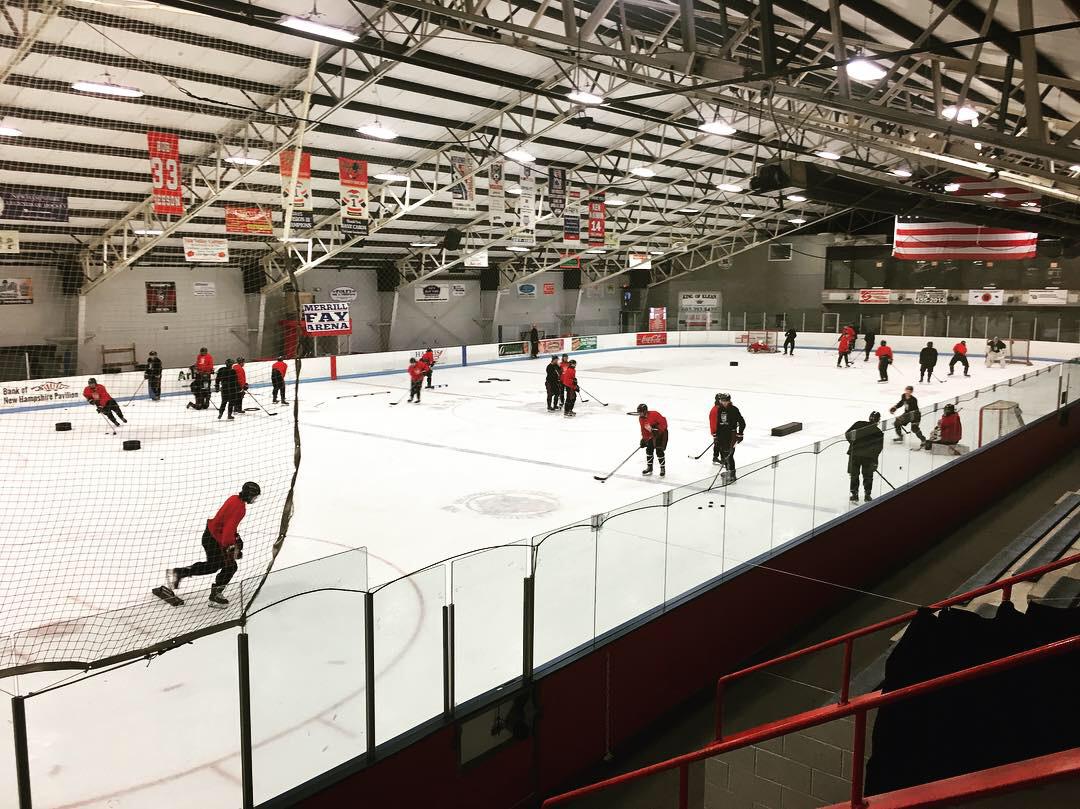 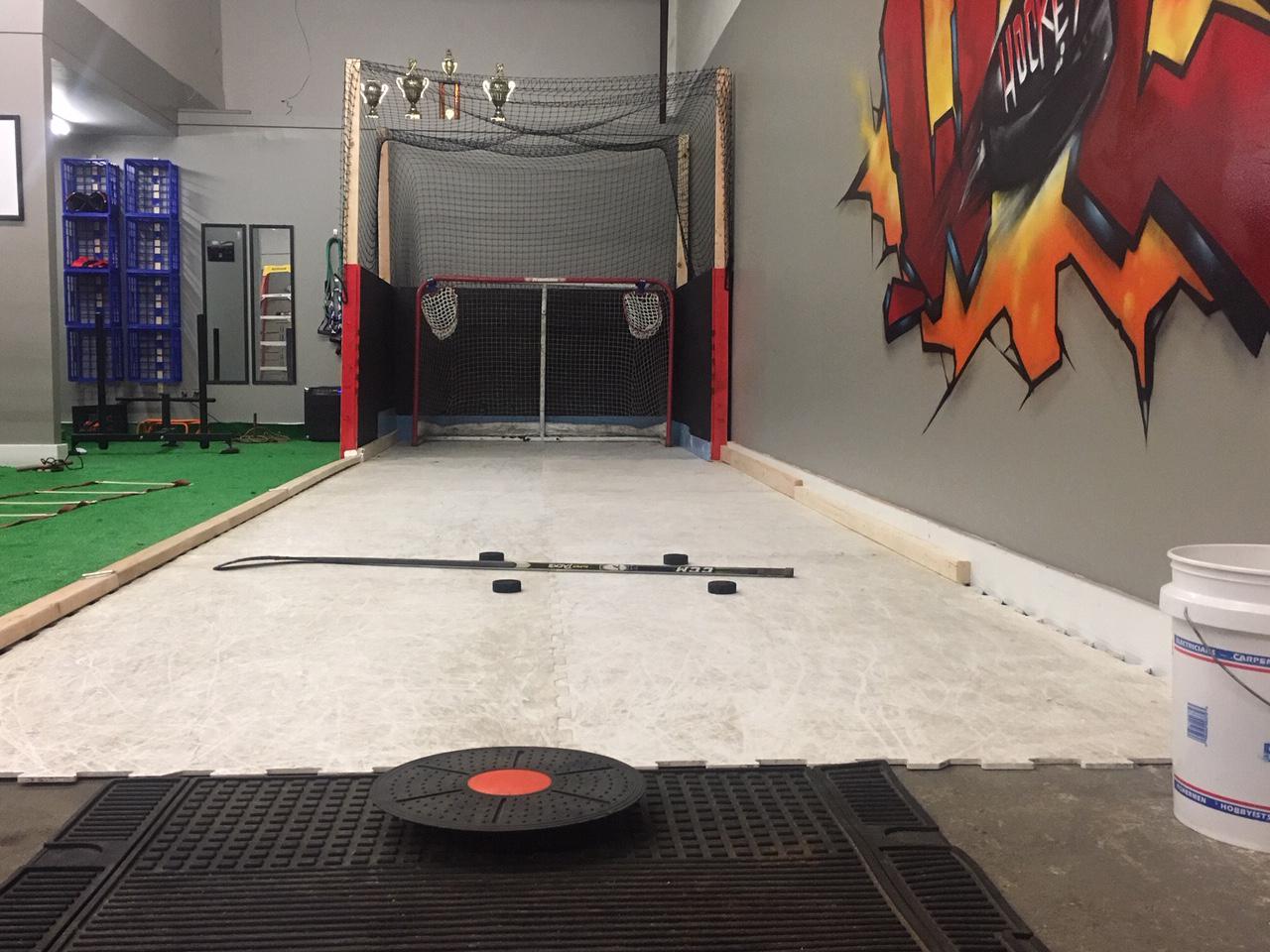 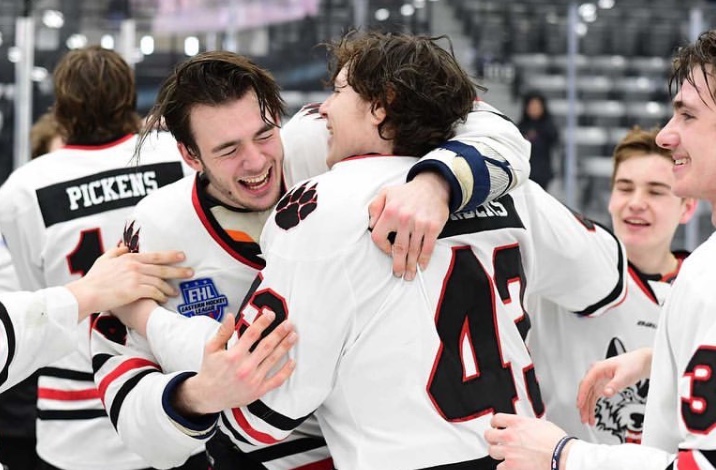 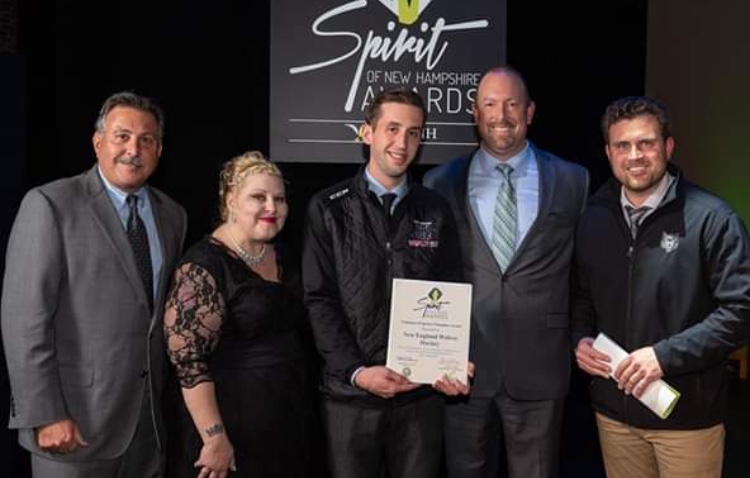