BOSTON, MA -- It has been proven time and time again that more USPHL players move on to col- lege hockey than from any other U.S. hockey league.
When they make it there, they continue to excel at spectacular rates of success.

First, you have to look at nine Hobey Baker Award nominees for the 2019 award, coming directly from the USPHL or 2018-19 USPHL member organizations.

When looking at the NCAA Division 2 and 3 ranks, three USPHL alumni have already been named overall Players Of The Year for their respective conferences, along with Goaltender Of The Year, Defensive Player Of The Year and Rookie Of The Year honors for four others.

It’s clear that USPHL players don’t just get to college - they get there and make a massive impact.

Joe Duszak was one of the nine Hobey Baker candidates for 2019, and he also earned the highest monthly honor for NCAA hockey - the Hockey Commissioners Award for the month of January.

Through Feb. 28, Duszak had scored 43 points in 33 games this year and is nearing the 100-point mark for his NCAA career.

Duszak played with the P.A.L. Jr. Islanders organization from 2012 through 2016, finishing in the USPHL Premier (the league’s top junior division at the time) as the Player Of The Year for 2015-16. He played in more than 180 league games, putting the current USPHL veterans we profiled in these pages in very good company.

He was also in very good company, as he was among eight different USPHL alumni to earn weekly or monthly awards. Dalton MacAfee (Army/South Shore Kings) is also a Hobey Baker candidate and two-time Defensive POTW winner in the AHA.

Matt Ladd (Canisius/South Shore Kings) is a two-time AHA Goalie Of The Week.

Ahead of the season-ending awards in March, USPHL alumni have already done very well in the Hockey East, which shares a very similar footprint to the NCDC and much of the USPHL Premier and Elite Divisions.

David Cotton, who played multiple seasons with the Little Bruins (current EHF Selects members), has earned Player Of The Month and Week honors this year with Boston College. He is among the field of nine Hobey Baker nominees with USPHL ties.

Craig Pantano (Merrimack/South Shore Kings) won Player Of The Week honors on Jan. 7 and was the Defensive POTW on Oct. 22.

Jack Dugan, who committed to Providence while with the Northwood School, won Rookie Of The Month twice and Rookie Of The Week honors once this season.

Chase Priskie, a senior and second-year captain at Quinnipiac, is a former South Kent Selects Academy player who was also named as a Hobey Baker nominee. He was ECAC Player Of The Week on Dec. 3.

Another Hobey Baker nominee is Cameron Donaldson, a sophomore at Cornell, who played for the Mid-Fairfield Jr. Rangers 18U team (now part of the EHF Selects Division) during the 2015-16 season.

Hobey Baker candidate Evan Barratt was the Big Ten Hockey Conference’s First Star on Nov. 20 and Second Star on Dec. 11. Barratt is a veteran of the USPHL 16U Division skating for Penn State.

Notre Dame’s Callahan Burke, who played with the Junior Bruins and Little Bruins in 2013-14, is the other USPHL alum from the Big 10 to receive Hobey Baker Candidate honors. He was Third Star in the Big 10 on Oct. 23.

Joey Daccord, a goaltender for Arizona State, split the 2014-15 season between the USPHL’s Boston Junior Bruins Premier team and Cushing Academy. He is now a junior for the Sun Devils and a Hobey Baker candidate, rounding out the group of nine players with USPHL ties.

Matthias Emilio Pettersen was a two-year South Kent Selects Academy standout in the USPHL, from which he committed to Denver University. He was the National Collegiate Hockey Conference’s Rookie Of The Week for Week 2.

Robbie Roche, who played at different times for the South Shore Kings, Boston Junior Bruins and Northern Cyclones organizations, was awarded Defensive Player Of The Year and First Team All-Conference.

Devan Sheth skated for the Islanders Hockey Club in 172 USPHL games before joining Assumption College. He was named Rookie Of The Year, First Team All- Conference and All-Rookie.

USPHL alumni filled five of the six spots on the NE-10 All-Rookie Team, and three of the six spots on each of the First and Second All-Conference teams. Along with Sheth on the All-Rookie team was his Assumption teammate Robbie Holyoke (South Shore Kings). Sheth and Holyoke each won two Rookie Of The Week awards during the season.USPHL alumni landed Northeast-10 weekly honors in 11 of the 14 weeks, and captured 16 of the 42 total weekly awards. Notably, Tim Decker (Saint Michael’s) won Goaltender Of The Week three times this season - he spent time with both the Rochester Jr. Monarchs and Syracuse Stars.

Former Islanders Hockey Club forward Lucas Michaud captured the Rookie Of The Year Award after a strong season of posting nearly a point per game (24 in 25) at Trinity College, and he was a Second Team All-NESCAC selection.

Michaud is another longtime USPHL veteran, having played in more than 160 games at different levels. Colby’s Nick O’Connor, another former USPHL Premier standout, was a First Team All-Conference player, as well as Michael Grande. A defenseman for Trinity, Grande has played for both Rochester and South Shore in the USPHL.

Another former King, goalie Tedy Loughborough, was named Second Team All- NESCAC. The NESCAC only named one Player Of The Week each week, and both Michaud and former Rochester Jr. Monarchs goalie Josh Sarlo (Tufts) earned those honors this year.

The CCC featured USPHL alumni in all but two out of the 14 weeks, capturing all three spots on Dec. 9 - Adam Tracey (Junior Bruins) as Player Of The Week, Conor O’Brien (Connecticut Jr. Rangers) as Rookie Of The Week and Ketola as Goalie Of the Week. That was Ketola’s first of two honors. 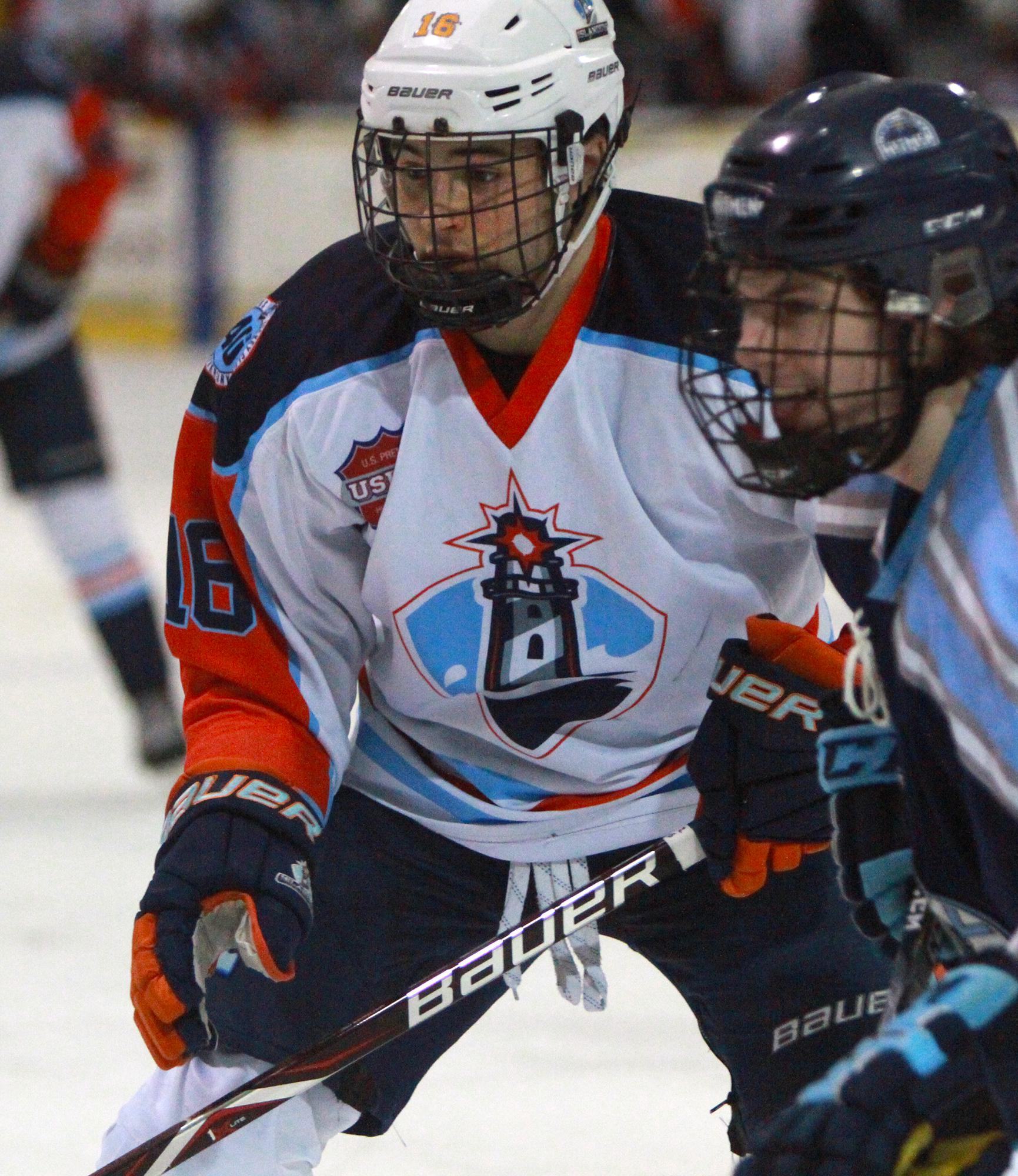 Lucas Michaud, a former Islanders Hockey Club player, was named Rookie Of the Year for the New England Small College Athletic Conference. He was a longtime veteran of the league playing in 169 league games. Photo by Joshua Boyd.

French national Tom Aubrun won Co-Player Of The Year and Goaltender Of The Year honors in the NEHC for Norwich, capitalizing on a career that saw him play his first North American hockey in Rochester with the USPHL. He was also First Team All-NEHC.

Chalk up another Player Of The Year honor for a USPHL alum, as Connor Powell (Elmira College) shared the honor with Manhattanville’s Matt Lippa. Powell played two years of USPHL 18U with the New Hampshire Jr. Monarchs.

J.R. Wojciechowski was Defensive Player Of The Year with Nazareth, and is a former Rochester player in the USPHL. 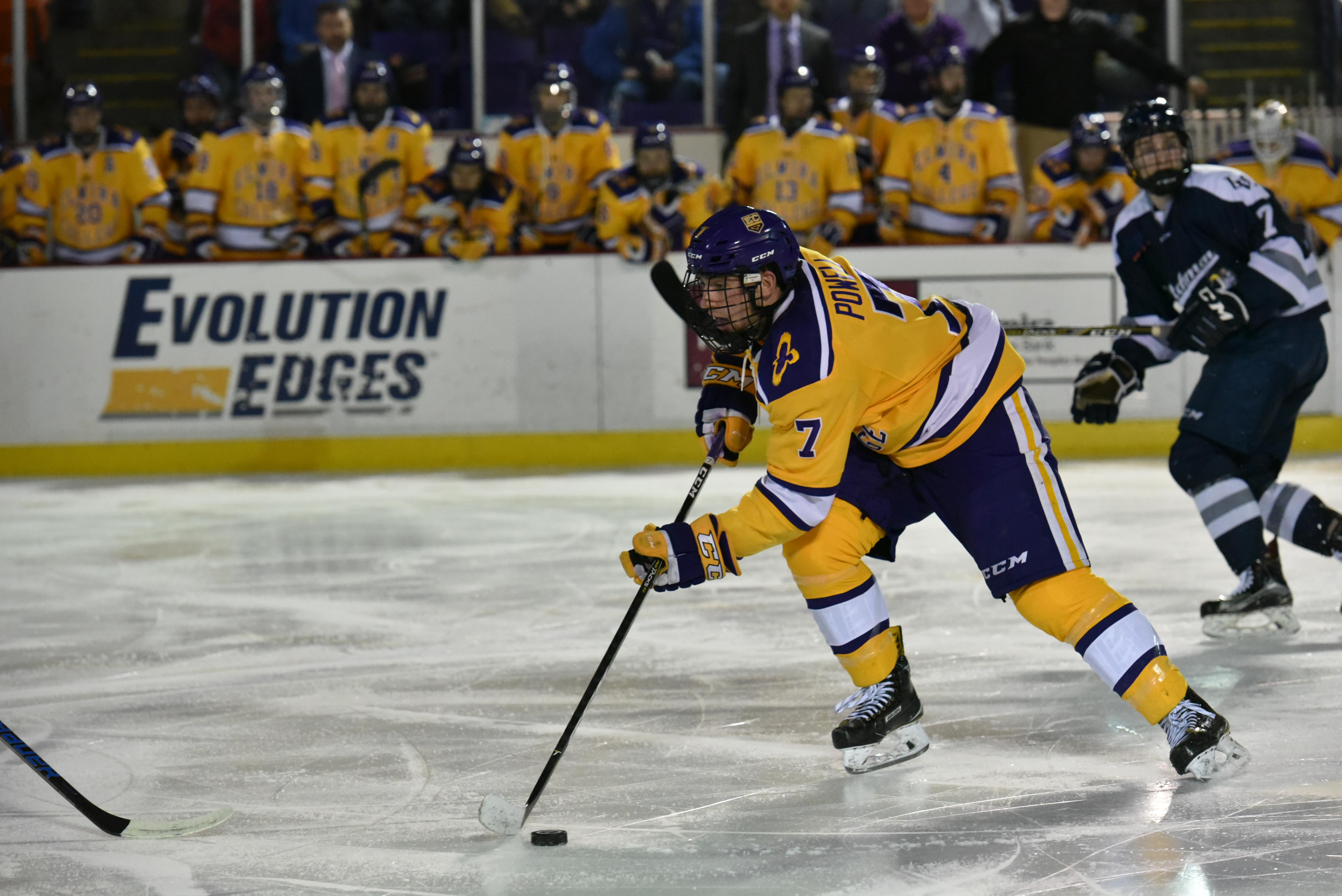 The MASCAC typically names its award winners and all-conference teams around March 7, but USPHL alumni have made great pitches to be all over those lists.

Looking at the MASCAC’s weekly honors, players from this league won awards in 11 of the 12 weeks, including sweeping the second week of the season. That week saw Mike Moran (Junior Bruins) win his second straight Player Of The Week award. He was recognized alongside former Junior Bruins Elite teammate Brian McGrath (Goaltender of the Week) and three-year South Shore King Jacob Ratcliffe (Rookie Of The Week).

McGrath won three GOTW’s this year, giving him an inside track on the conference’s top goalie award. Former Hitmen Matt Volonnino (Plymouth St.) was also twice Player Of The Week, and Parker Butler (UMass-Dartmouth) was three times a GOTW.

Conlan Keenan played nearly 200 junior games in the USPHL and its predecessor leagues, finishing with the New Jersey Hitmen before joining SUNY-Geneseo.

Keenan, the captain of Geneseo, was a First Team All-SUNYAC selection and a three-time Player Of The Week.

USPHL alumni earned weekly awards in 13 of the 14 weeks, accounting for nearly half of all awards in the SUNYAC. 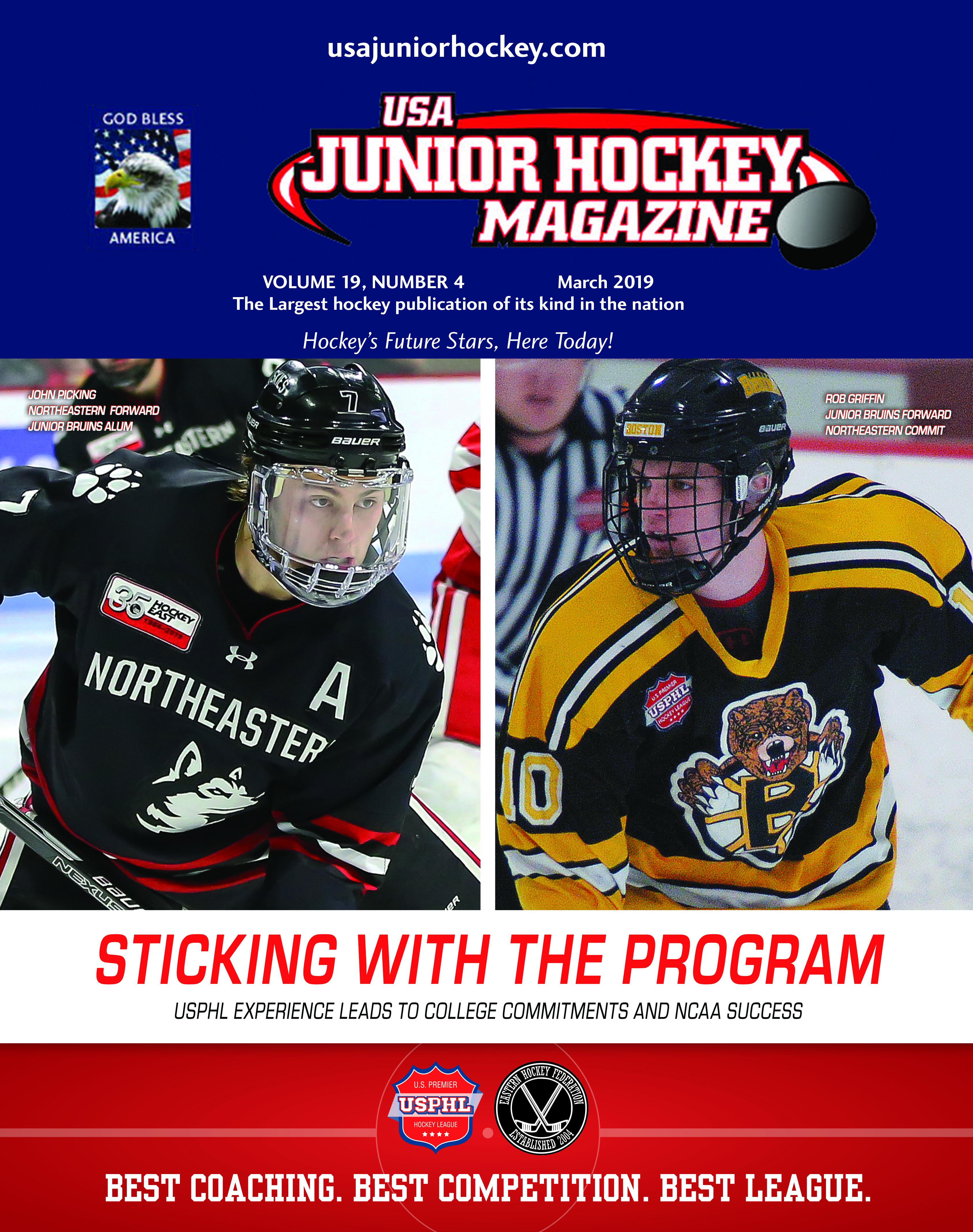